Tapping into the Denver Summer Scene – Day One 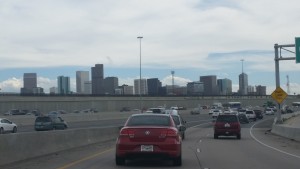 The kids were gone, the house was clean, the garden was tended, and a fresh batch of salsa was just processed last night. Our suitcase was packed and Merri Beth and I were ready to head to Denver for an extended weekend. Fun, not work.

We left RDU and the first leg of our trip was through Atlanta. After we settled into our seats, I was informed that I was upgraded. I handed the new seat assignment to Merri Beth so that she could enjoy some time in first class—living the good life.

We had a 90 minute layover in Atlanta where we grabbed some lunch and boarded our flight to Denver. There was a slight delay on takeoff, due to a thunderstorm that was passing through, but it was less than 20 minutes. We still made it to Denver on time. 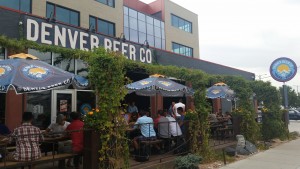 After getting the rental car, we fought some rush-hour traffic to get to our hotel. We quickly settled in and walked over to Denver Beer Company to meet some friends for happy hour.

I pinged some CityCamp and open government buddies over Twitter before we came out. Brian Gryth and Scott Primeau were both able to make it to happy hour with us. In fact, Scott even brought his wife and 4-month old daughter along—it was awesome to meet them.

Merri Beth and I shared a flight of beer. We liked all of the beers we had, but settled in on the Incredible Pedal IPA. We also enjoyed a nice snack from Basic Kneads Pizza. The wood-fired thai pizza we shared was delicious. 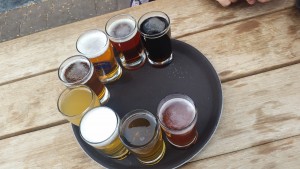 Scott and his family had to leave, it was getting close to bed time for the little one. After happy hour, Brian joined us for dinner. We headed over to My Brother’s Bar. The vegetarian options were limited, but MB enjoyed a Bison burger. O’dells was on tap, so things were all good.

We said our good-byes and thank-you’s to Brian and headed on a nice stroll back to our hotel. It was late (for us) even though it was only 9:00 pm local time. We decided it was best to rest up and get ready for a full day tomorrow.

On tap: Elitch Gardens amusement park, breweries in Loveland, and a visit to Chimney Park. 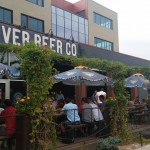 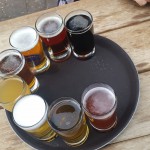 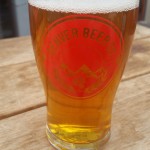 Jason Hibbets is a senior community architect at Red Hat which means he is a mash-up of a community manager and project manager for Opensource.com--a publication and story-telling platform for open source communities. At night, he wears a cape, and is a captain for the Open Raleigh brigade, as well as a co-chair for NC Open Pass. Jason is the author of a book called The foundation for an open source city--a resource for cities and citizens interested in improving their government through civic hacking. While writing the book, he discovered his unknown super power of building communities of passionate people. Jason graduated from North Carolina State University and resides in Raleigh, NC with his wife, two kids, two border collies, chickens, lots of tomato plants, and a lazy raccoon somewhere in an oak tree. In his copious spare time, he enjoys surfing, running, gardening, traveling, watching football, sampling craft beer, and participating in local government--not necessarily in that order, but close to it. You can follow him on Twitter: @jhibbets
View all posts by Shibby →
This entry was posted in Travel and tagged beer, Colorado, Denver, Denver Beer Company, food, RDU. Bookmark the permalink.

One Response to Tapping into the Denver Summer Scene – Day One