You can view more recent and upcoming speaking engagements on this page. 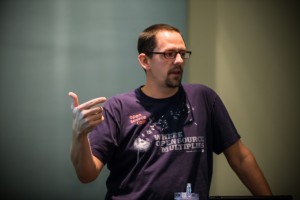 I was emcee for this two hour event, responsible for a brief introduction to Innovate Raleigh and introducing the line-up of speakers.

I co-presented The Open Source Why, with Shawn Briscoe from BlackDuck Software during a special annual meeting of the Columbia Information Technology Council. We talked about how the conversation is changing from why should companies use open source to how should companies get involved and start contributing. I concluded the session with 10 ways to get started with open source.

I also gave a presentation called Raleigh, NC — An open source city, to share how open source is influencing the open government movement in Raleigh.

I gave a talk called “Open source all the cities” (video) at the monthly meeting of the Triangle Linux User Group (TriLUG). The presentation is a look at the open government movement in Raleigh, a preview for my book The Foundation for an Open Source City, and a overview of the different apps and platforms the City of Raleigh has deployed in the Open Raleigh portal.

I was the event emcee for NC Datajam, a kickoff to NC Datapalooza–the nations first regional datapalooza event. In addition to kicking off the event, I also facilitated the design thinking sessions and assisted Nick Sinai, from The White House, in selecting the final teams and ideas.

I presented my Open Source All The Cities talk at the Open Source Business Conference and had some excellent conversations with attendees after the session.

I took the BART (Bay Area Rapid Transit) from San Francisco to Oakland and attended the Open Oakland Code for America Brigade meet-up. I gave a quick version of my Open Source All The Cities presentation and learned about the activities happening in Oakland, CA.

As co-chair of CityCamp NC, I was emcee for the conference but also had an opportunity to give a lighting talk. This is a 5-minute story about my book, The foundation for an open source city, presented at CityCamp NC on May 30, 2013. I talk about the inspiration for the book and highlight the open government movement in Raleigh and the robust community we are building around this movement in the Triangle.

I was a moderator for What’s your big idea? and lead a great group people along with Jennifer Bosser from the Chamber of Commerce over a 90-minute session during Innovate Raleigh Summit. We had over 70 people creating mind maps around six different topics.

I gave a six-minute talk, something different than I normally talk about. I blended a mix of creativity and community initiatives to help kickoff SPARKcon during the IDEAspark event. It was a PechaKucha 20×20 talk: 20 slides that auto-rotate every 20 seconds, totalling six minutes. You’ll enjoy this creatively balanced presentation:

If you are interested in open source but don’t know how to code, I provide 10 practical ways to get started. This presentation is based off of an article I wrote, but wanted to bring it to life during a 5-minute lightning talk at RTP 180.

I co-presented with City of Raleigh CIO Rail Roper at the Code for America Summit. Our mission was to highlight the open source, open data, and open government initiatives happening in Raleigh. Gail explained the government side while I tackled the citizen side.

I had a great opportunity to present to over 80 people in the Emerging Issues track at All Things Open. I shared the open source, open government, and open data story in Raleigh from both the government and citizen side and had an extensive dialog with attendees.

I participated in a panel discussion with CityCamp Raleigh planners and we shared our insights about planning the unconference and other efforts around open government. Additionally, we gave a preview to CityCamp Raleigh 2012.

I gave a 30-minute keynote about the open source culture of Raleigh, highlighting efforts such as Triangle Wiki, Walk Your City/Walk Raleigh, and Innovate Raleigh.

I gave a 45-minute presentation about the open government movement in Raleigh, NC highlighting both citizen and city efforts to create Open Raleigh with a focus on creating an open data portal.

As s CityCamp Raleigh co-chair, I was emcee for the three day unconference and I also gave a 5-minute lightning talk about the open government movement in Raleigh, NC.

I gave a 45-minute presentation about the open government movement in Raleigh, NC highlighting both citizen and city efforts to create Open Raleigh.

I organized, presented, and hosted a session at Red Hat Summit that featured eight different speakers highlighting how open source can be applied to disciplines such as microgrid energy, pop culture, design, and more. See the entire playlist on YouTube.

I gave a 5-minute lightning talk about the open government movement in Raleigh, NC highlighting the CityCamp Raleigh activities and the recently formed Raleigh Code for America Brigade.

I organized and hosted a session to celebrate the 10-year anniversary of Creative Commons. The meetup featured eight different speakers highlighting how Creative Commons is used throughout the Research Triangle community including book publishing, science, education, and game design.

I gave a 60-minute presentation about the success of open source and how the principles of sharing, collaboration, transparency, meritocracy, and rapid prototyping are changing the world. This presentation uses opensource.com as a case study to explore the ways the website went from an idea to a growing community and how the different components of Drupal are used to help build online community.

As s CityCamp Raleigh co-chair, I was emcee for the three day unconference.

At the DrupalCamp day during SouthEast LinuxFest (SELF), I gave a presentation focused on community building using opensource.com as a case study.

I co-presented with Jonathan Minter, Chief Technology Officer, City of Raleigh, on how CityCamp created a culture of collaboration and how the transparency of our team structure lead to accountability.

I participated in a panel discussion with Alissa Black, Government Relations Director at Code for America and Steve Bretches, a consultant at IBM. Our goal was to provide insight about open government movement from what we’re seeing around the rest of North America and beyond.

I gave a 45-minute presentation about opensource.com, how the website was started and ways that attendees could get involved, contribute, and learn more.