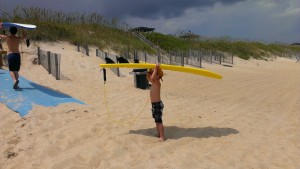 Day two of surf camp was a whole new adventure at Farmdog Surf School. A bunch of new kids arrived for the three day camp which runs on Tuesdays and Thursdays. Even though Zander somewhat started over today, I like how the basics were reinforced, especially the ocean safety.

While Zander and the rest of the campers were acquainted with the boards and getting ready to hit the water, I took a quick call for work. I’m not sure if I’ve ever actually taken a work call from the beach before, but I did today. I tried not to rub it in, but when the lifeguard goes by on the 4-wheeler, I had to briefly apologize.

After my call was over, the campers were ready to get in the water. Since there were so many today, there were going to start a rotation system for everyone to take turns in the water. I asked Aaron (one of the instructors) if I could get in the water with Zander to get him into some waves and got the OKay. I pushed Zander into a few waves for about 30 minutes, then let him get in the rotation.

I had to run back to the house to take a few more calls, and I was back just after noon. I brought out my 7’10” and caught a few waves. And the best part of today was when Zander and I caught a wave together. That was magic.

While Zander wrapped up camp, I caught a few more waves then packed up the Jeep. As I was getting the last few items in from the beach, the roof opened up. We could see a storm was coming, but it came in fast and strong. The rain was pelting us from the west. We barely made it into the Jeep.

We celebrating day two of surf camp by heading over to The Pit for Taco Tuesday. Probably not the best idea. It was busy and the wait staff was mediocre. (Just like the last time we went there a few weeks ago.) It was 15 minutes before we got someone’s attention, and at that point, I had to ask someone if someone could help us. We finally got our food, which was delicious, but something has to be done about servers.

To end on a bright note, check out some videos and pics from today’s camp. 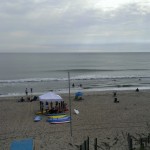 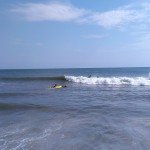 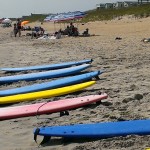 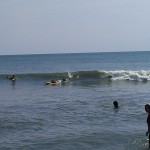 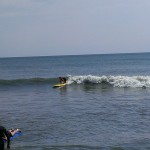 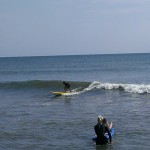 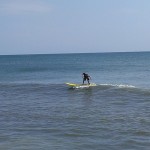 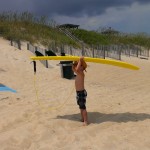