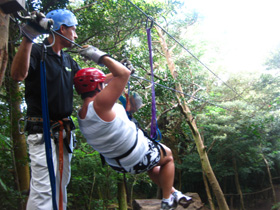 Thursday, December 22 was our fifth day in Costa Rica and we squeezed a lot in as our week was ending quickly. We were up early to hit the road for a 2-hour drive to Buena Vista. Both Merri Beth and I woke up at some point early in the morning when we heard the power go out in Playa Negra. We packed up for the day in the dark, saved by the glowing of our cell phones.

We were on the road by 6:00 AM and stopped off for breakfast in Liberia. Around 8:30 AM, we arrived at the Buena Vista Lodge and were ready to start our day. After paying for the Megacombo package, the first thing we did was to prepare a few hours of zip lining through the jungle.

Gliding through the tree tops

The guides helped us get our safety harnesses on and fit us for helmets. Then we took a short hike on a jungle trail up the mountain side to the first of 11 platforms. We got some safety tips and instructions on how to properly zip line: never put your hand in front of the pulley, strong arm to the back, and how to brake (slow down). The first cable was a practice run. Now we were ready for the real deal. Zander went first and was attached to a guide. Merri Beth went second, I went third, then another family was behind us. 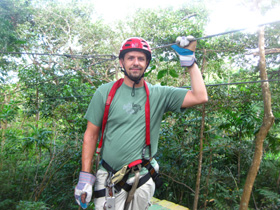 The canopy tour consisted of 10 cables and 11 platforms that let us glide through the treestops of the tropical forest. On our first platform, we saw Howler Monkeys and Toucans. MB’s trip was complete after seeing the monkeys, but we had several more platforms to explore! Each platform/zip line varied in distance and height.

We had a blast on the canopy tour. Even though I’m not comfortable with heights, I was totally fine and felt completely safe the entire time. Zander loved it, but opted to not go solo on the last zip line. However, both MB and I did go upside-down on the final cable. It was unreal!

After the canopy tour, we changed into our swim gear for the 400 meter water slide. We got our instructions and innner tubes, then made the walk up the mountain-side to the top of the water slide. When you go down, they stop the flow of water, ask if you’d like slow, medium, or fast, then let the water sweep you away down the slide. All of us choose “slow” for the first trip down. I’m not sure it really mattered. About halfway down the slide, you lost control, and it felt like you were going to flip out of the slide. Then you slowed down for the final drop into the pool of water at the bottom.

The family did the water slide together twice. After that, Zander and I climbed back up three more times to enjoy the slide. We were done after a total of five trips. The water was cold or “refreshing” according to the worker at the top. The slide was just a little too rough to say it was super fun. We were ready to dry off and grab some lunch. 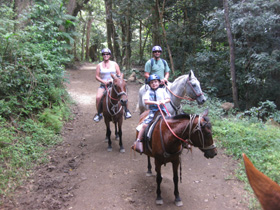 After lunch, we saddled up for an hour-long horseback ride through the mountain trails at Buena Vista. Zander was able to ride solo on his horse. It ended up being MB, Zander, myself, and our guide, who’s name happened to be Alexander—and he spoke zero English.

The horseback ride was amazing. And even though our guide spoke no English, he was the best part of our day. We were able to communicate with the “un poco” Spanish that MB and I knew. At one point, he was asking us if we wanted to go to the waterfall, which we didn’t understand. Eventually, we did, and said Si! We want to go, vamanos. He took pictures, made sure Zander was having a good time, and took us to a beautiful waterfall.

The horseback ride was not just a ride through the park. Our destination, besides the waterfall, was the spa. After we arrived, we changed into our swimsuits and enjoyed the luxurious mountain spa. 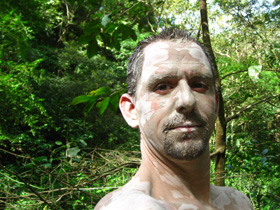 First we entered the steam room, to open up our pours. Then we painted our bodies and played with mud. We layered ourselves from head-to-toe in warm, refreshing mud. After about 10 minutes, we rinsed off (in a cold shower) and were ready for the relaxation of the hot springs.

Each hot spring was a different temparture. The first one was baking at over 100°. Each pool “downstream” got a little cooler. We weren’t able to relax as much as we wanted with Zander swimming around everywhere, but we got the job down.

After our time at the spa, it was time for our dust bath. While it wasn’t part of the Megacombo, we added it as the final treat to the day. We could have taken the horses back to the lodge, but we opted to take the tractor instead. And since we were on dirt roads, the tractor kicked up some dust and gave us an unwated dust bath. Oh well, if that was the worst part of the day, then we’re doing pretty good. 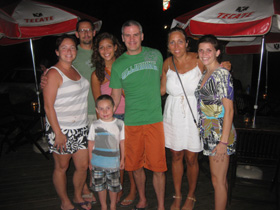 We had an awesome time at Buena Vista and made plans to meet the Phillips’ in Playa del Coco after our canopy tour and horseback ride. Coco was about a 20 minute drive from the Liberia airport. After we arrived in the small beach town, we checked out the beach and asked for directions to Zi Lounge, our pre-arranged meeting place.

We were in luck, it was happy hour at Zi Lounge. Merri Beth and I ordered a few beers and Zander got a smoothie. Then our friends, Lance, Anissa, Kaitlynn, and Courtney arrived. Anissa and Kaitlynn were tan as tan can be and Lance and Courtney were fresh off the airplane. We decided to head out to dinner.

We drove to the outskirts of Playa del Coco to get some Asian/sushi, Italian, and Mexican (an interesting combination). We were overwhelmed at first with the three menus. The food was great and we had an awesome time catching up with the Phillips’. Merri Beth’s birthday week continued and dessert made it way to the table (with several spoons).

We said our good-byes and drove back to Playa Negra. We were exhausted can glad to be back at Cafe Playa Negra for the night. Tomorrow would be our last full day in Costa Rica.

Jason Hibbets is a senior community architect at Red Hat which means he is a mash-up of a community manager and project manager. At night, he wears his cape and is a captain for the Open Raleigh brigade, as well as a co-chair for NC Open Pass. Jason is the author of a book titled The foundation for an open source city--a resource for cities and citizens interested in improving their government through civic hacking. While writing the book, he discovered his unknown superpower of building communities of passionate people. Jason graduated from North Carolina State University and resides in Raleigh, NC with his wife, two kids, two border collies, chickens, lots of tomato plants, and a lazy raccoon somewhere in an oak tree. In his copious spare time, he enjoys surfing, running, gardening, traveling, watching football, sampling craft beer, and participating in local government--not necessarily in that order, but close to it. You can follow him on Twitter: @jhibbets
View all posts by Shibby →
This entry was posted in hibbets.net, Travel and tagged beach, Buena Vista, Cafe Playa Negra, canopy tour, Costa Rica, horseback riding, Playa del Coco, pura vida, spa, vacation, zip line. Bookmark the permalink.