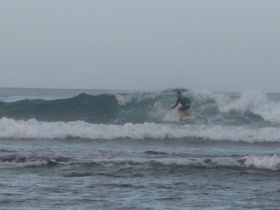 Jason drops in at Playa Negra

It’s Friday, December 23, and our last full day in Costa Rica. I was up at 5:30 am to go surfing. I grabbed my board and made the 10-minute walk to Playa Negra. There were a handful of guys in the water and the tide was low, exposing some of the reef in the shallow areas. The waves were chest to head high and a little mushy with clean faces.

I met a guy out in the water, Mike, who had just arrived in Playa Negra last night and was from Encinatis, CA. I caught some great waves today. Merri Beth and Zander walked down to the beach and watched us surf for a while.We surfed for almost two hours. On my last wave in, I got really close to the reef but avoided any confrontation in the shallows area. I paddled in to an excited Zander who, of course, wanted to get in the water. Instead, we hung out on the beach for a while before heading back to Cafe Playa Negra. 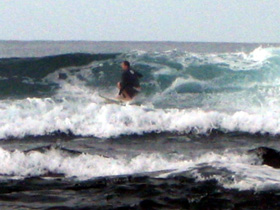 After the morning surf session, I was starving. We ate breakfast at the cafe then headed back to the beach for the rest of the morning. During breakfast, we were planning out what we wanted to do for the rest of the afternoon. We had so much fun ziplining the other day, that we were looking into a canopy tour that was closer than a two-hour drive.

Then we talked with Lula (who owns Lula’s Tours). She had several other tour options and activity ideas. She convinced us to sign-up for a sunset cruise that left Tamarindo at 1:00pm. We did something similar in Barbados and Kauai and had a blast. Until then, we hit up the beach for the best sun of the day: morning sun.

Fun In The Sun

We walked back down to Playa Negra and went to the Southern part of the beach. We found some shade in the trees (for our stuff) then hit the water. The surf in this area was more beach-break instead of further out on the reef. Merri Beth and I got Zander back on the board. He caught a few waves, but the current was strong and I saw a few good waves coming in that I wanted to try out.

I surfed for about 45 minutes, catching some fun waves and locking into a few close-outs. We were starting to get excited for the sunset cruise and wanted to get to Tamarindo with plenty of time.

We knew the way this time and drove North to the small tourist town. We found some parking and walked on the beach to meet the folks from Blue Dolphin Sailing. After a short wait, we got on the Zodiac which took us out to the custom built, 40-foot sailing catamaran.

All Aboard the Blue Dolphin 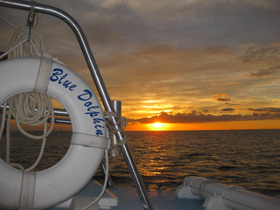 We had a lively group of folks on the boat and the crew was very inviting and spunky. After a quick safety review, we were sailing North on the Pacific Ocean. The crew kept the drinks flowing. Merri Beth and I enjoyed something tropical, while Zander sipped on an orange soda.

We enjoyed sun bathing, sailing, snorkeling, and kayaking while on the catamaran. Once we sailed around the point, the crew anchored the boat and just about everyone got in the water. Merri Beth, Zander, and I put on some swim fins, masks, and snorkels, and explored the volcanic reef. The water was a tad choppy, but we were able to see some cool fish. 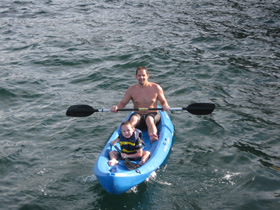 After some snorkeling, Zander and I got on the two-seater kayak and paddled around a little bit. Our water time was expired too quickly. While the crew was herding the rest of the passengers back to the boat, Zander and I jumped off the back of the, practicing cannon balls and can openers.

Once everyone was back on, the crew served some food. There was some traditional Arroz con Pollo (Chicken and rice) and a variety of other dishes. People were hungry because the food didn’t last that long. At least the coolers were full of beer.

On the way back to Tamarindo, Zander got to steer the boat. Of course, he’s a pro at this with all the practice on Jordan Lake thanks to Captain Huff.

Then, we had the perfect sunset. We were right on the water and the sun looked huge on the horizon. The colors were plentiful. I took a ton of pictures. We couldn’t get enough of this sunset. We actually forgot that it was our last evening in Costa Rica until we got back to the beach. 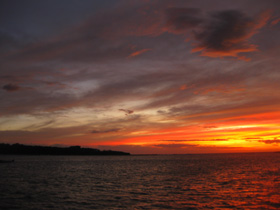 Sailing on the Blue Dolphin was awesome. The entire family had a great time. Check out all of the pictures from our sunset cruise and this amazing sunset.

Back in Playa Negra, the cafe was hopping. On Friday nights, Stonefish Photography puts on a weekly slideshow of all the surf pictures from the week. Even Shibby made it on the big screen surfing Playa Negra.

We grabbed a few beers and a late night snack (ceviche). Our flight didn’t leave until 1:30pm tomorrow, which means I’ve got a few hours to surf in the morning. I made plans with my new friend Mike to get up at 5:30 and hit the water. Until then, we listened to a band play almost all night long. Well, until we fell asleep to some 80’s tunes.