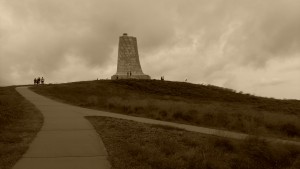 On Sunday, June 30 we continued to dodge the spotty, crazy weather here in North Carolina. I don’t remember ever having this much rain to start off the summer. We tried to get to the beach early today, before the rain came through. Lucky for me, I scored a few waves during low tide.

Merri Beth, Zander, Kalani, and I hit the beach in Kill Devil Hills. We went minimal today, beach chairs and towels. The sun was peaking through the clouds and I thought we had at least an hour on the beach before the next round of rain. I left my surfboard at the house, thinking we were just trying to get in some beach time. But once I saw a few little peelers coming through, I drove back to the house to grab my board.

Of course, once I get back to the beach, it was starting to sprinkle. We got most of our stuff in the Jeep and tried to tough it out. I decided to get in the water to catch a few waves. As I was getting my wetsuit on, MB and was walking up the beach access with the kids. They decided to hang out in the Jeep while I surfed.

The waves were thigh to waist high, maybe a few bigger sets rolling in. It was just past low tide, and the incoming tide usually brings stronger, slightly bigger surf. The water was 65°. Yes, pretty cold for later June. The wind has been blowing southwest for a few days, which pushes the warm gulf waters away from the shore. It’s a natural occurrence called upwelling, where the wind blows warm surface water away, and the water is replaced by deeper, usually colder water.

I caught some fun waves, but the water was pretty nasty. It was cold, minus one, brown and murky, minus two, and lots of seaweed and “ocean junk” in surf zone, minus three. But there was surf, which is better than the waves we get in Raleigh, plus ten.

We headed back to the house and chilled out for a bit. When the next break in the rain came, Zander and I hopped on the bikes and rode to the Wright Brothers Monument. We walked to the top of the historic hill and enjoyed a great view of Kill Devil Hills. The next batch of rain was coming, and Zander and I had to bike in the rain for a bit. no problem, we had our board shorts on! 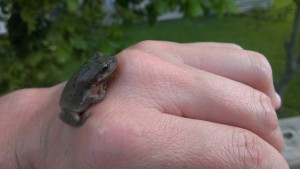 When we got back to the house, Merri Beth and Coco were both napping. Zander and I found quiet activities to do so they could rest. We got rained out for most of the afternoon, and stayed in the beach house. After MB’s nap, she ventured out to do some shopping. I stayed back with the kids and then mom got back from work.

The weather finally cleared up. Once I got Coco down for her afternoon nap, Zander, Nana, and I played some baseball in the yard. MB got back from shopping and shared her scores.

We grilled some burgers for dinner and I found some new frog friends hanging out in the grill cover. They were very friendly. I made sure to move them before firing up the grill. The burgers were delicious.

It was an early night for us. We were planning to head to Ocracoke tomorrow. 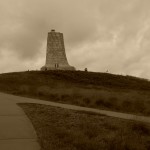 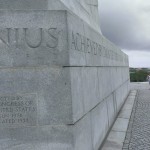 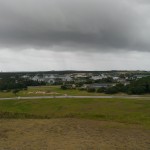 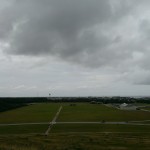 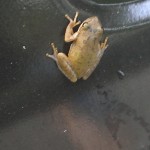 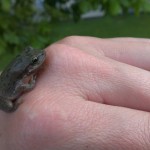 Jason Hibbets is a senior community architect at Red Hat which means he is a mash-up of a community manager and project manager. At night, he wears his cape and is a captain for the Open Raleigh brigade, as well as a co-chair for NC Open Pass. Jason is the author of a book titled The foundation for an open source city--a resource for cities and citizens interested in improving their government through civic hacking. While writing the book, he discovered his unknown superpower of building communities of passionate people. Jason graduated from North Carolina State University and resides in Raleigh, NC with his wife, two kids, two border collies, chickens, lots of tomato plants, and a lazy raccoon somewhere in an oak tree. In his copious spare time, he enjoys surfing, running, gardening, traveling, watching football, sampling craft beer, and participating in local government--not necessarily in that order, but close to it. You can follow him on Twitter: @jhibbets
View all posts by Shibby →
This entry was posted in OBX, Surf, Travel and tagged bike, outer banks, upwelling, waves, Wright Brothers. Bookmark the permalink.