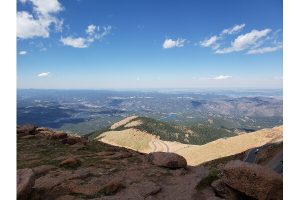 Merri Beth and I were heading to Colorado to see the Dirty Heads at the Red Rocks. But before the big show, we had an open plate to explore. Our first day in Colorado included lots of travel, our flight to Denver and then driving to Colorado Springs. Of course there were a few snacks and food sampling at a few breweries along the way. Let’s dive into the specifics and see how a mostly unplanned Saturday afternoon turned out for us.

We had a great flight to Denver on Delta Airlines. On our first leg to Atlanta, we got to fly first class. Nice! Then, on our second segment to Denver, we were upgraded to Delta Comfort. Thank you Red Hat for allowing me travel and rack up some status. We finally arrived in Denver, got our rental car, and were on our way.

We were heading to Colorado Springs for a few days. On the way on south I-25, we stopped in Castle Rock (about halfway between the airport and Colorado Springs) for a snack at Rockyard Grill. We shared a few appetizers and I got flight of their beer. As we approached Colorado Springs, we grabbed some dinner at Colorado Mountain Brewing before we checked into our hotel.

MB and I were pretty exhausted from traveling most of the day, but were still eager to explore. We decided to check out at least one brewery before crashing for the night. And one of the top breweries in Colorado Springs was Goat Patch Brewing.

We drive down a few exits on I-25 and made are way to Goat Patch. And of course, one of the bartenders went to NC State. I happened to be wearing a Raleigh shirt. She asked us if we were from NC and then explained her situation. We chatted for a few minutes and enjoyed our time at Goat Patch. This is a place I would recommend and go back to. Great beers, a chill atmosphere, and some nearby food options.

When we got back to our hotel room we realized that we forgot to ask for a sticker for the beer fridge, but regardless, we had a good time. We’ve got a full day tomorrow, including a wolf tour, more breweries, and some hiking with fossils.

Jason Hibbets is a senior community architect at Red Hat which means he is a mash-up of a community manager and project manager. At night, he wears his cape and is a captain for the Open Raleigh brigade, as well as a co-chair for NC Open Pass. Jason is the author of a book titled The foundation for an open source city--a resource for cities and citizens interested in improving their government through civic hacking. While writing the book, he discovered his unknown superpower of building communities of passionate people. Jason graduated from North Carolina State University and resides in Raleigh, NC with his wife, two kids, two border collies, chickens, lots of tomato plants, and a lazy raccoon somewhere in an oak tree. In his copious spare time, he enjoys surfing, running, gardening, traveling, watching football, sampling craft beer, and participating in local government--not necessarily in that order, but close to it. You can follow him on Twitter: @jhibbets
View all posts by Shibby →
This entry was posted in Brewery, Travel and tagged beer, Colorado, vacation. Bookmark the permalink.