Half way through the 2015 fall race season

The fall race season started on November 1 with a warm weekend in Raleigh after ending Daylight Savings. Which meant most people got an extra hour of sleep, but that meant I had an extra hour of anxiety before race time.

City of Oaks and a new course 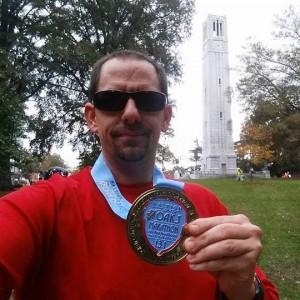 My support team for the weekend included Merri Beth, Zander, Coco, and my mom. We had a blast on Halloween at the Clemson versus NC State football game and went to the Carolina Hurricanes game the night before. I limited my tailgating, but probably could have rested a little more to prepare for the race.

The first half of the City of Oaks was pretty solid. I was running a good pace, under 8 minutes/mile. It was a slightly new course this year, that looked faster on paper. But the last half, the hillier portion, wasn’t that great for me. I wanted to throw in the towel at the 10k mark, but pushed on to finish in 1:48. I was having trouble breathing with the humid air and was out of energy. I didn’t hit the wall, but was pushing up next to it. I finished, which is always goal number one. After the race, we enjoyed brunch at Tupelo Honey in Cameron Village.

Another great Outer Banks half marathon

It was pouring rain in Raleigh when we left for the OBX on Saturday, November 7. But once we got through Rocky Mount, the skies cleared and the weather was summer-like. We arrived at the beach around 2:00 pm, unloaded the car, and watched the end of the NC State versus Boston College football game. Then, the weather turned vicious.

A cold front was approaching from the north and I still needed to get my race packet. We took refuge at the Outer Banks Brewing Station and I grabbed my race bib from the expo nearby. We sampled some beer and had a few snacks, then went back to the beach house after the temperature dropped 15º and rain was steadily coming down with a stiff breeze out of the northeast.

We watched the Florida State versus Clemson football game, then got some takeout from Bad Bean for dinner. After that, it was a pretty chill night even though we had trouble getting Coco to go to bed. Wonk, wonk. 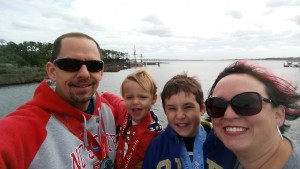 The rain had pushed through, but the wind was still gusting out the the northeast. Temperatures were in the mid 50’s which was perfect for running. Minus the wind, things were looking good for race day. My mom dropped me off at the start line and then we both went to work :).

Merri Beth and the rest of my support team (Zander and Coco) were going to meet me along the course and at the finish line. I was in the first corral that started at 7:02 am. We were off! For the first four miles, I was dealing with a tight left calf. I wasn’t sure what the deal was, but I was concerned that I was going to get a charlie horse and jeopardize the race. Luckily, I nursed it and got some liquids in me to push through it.

After mile 4, I was in the zone. I started getting in the groove, passing some people, and set my sights on the finish line. I charged the bridge and finished in 1 hour and 43 minutes. Zander ran with me for the last half-mile. Much appreciated support and he helped me pass a few more folks before the finish line inching up a few slots. Unofficial live results said I came in 141th place overall out of 2,220 runners. Not bad! I finished with a smile, felt confident, and accomplished. 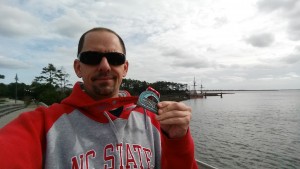 After the race, we let the kids play at the playground while I stretched out and relaxed. Then we took some fun pictures in downtown Manteo and explored the Elizabeth II. Before we headed back to the beach, we waited at the finish line for my friend Edith Rowe to finish her 5th full marathon. Congrats!!

On the way back, we grabbed some lunch from Stop N Shop then stopped by to see my mom at work. We headed back to the beach house, ate lunch, then started packing things up for the ride back to Raleigh.

Check out my new race results page, documenting all my running adventures. 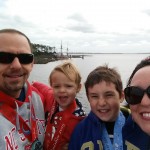 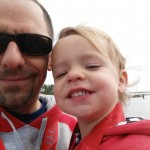 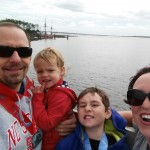 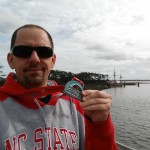 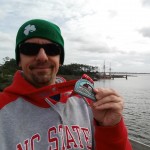 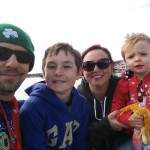 Jason Hibbets is a senior community architect at Red Hat which means he is a mash-up of a community manager and project manager for Opensource.com--a publication and story-telling platform for open source communities. At night, he wears a cape, and is a captain for the Open Raleigh brigade, as well as a co-chair for NC Open Pass. Jason is the author of a book called The foundation for an open source city--a resource for cities and citizens interested in improving their government through civic hacking. While writing the book, he discovered his unknown super power of building communities of passionate people. Jason graduated from North Carolina State University and resides in Raleigh, NC with his wife, two kids, two border collies, chickens, lots of tomato plants, and a lazy raccoon somewhere in an oak tree. In his copious spare time, he enjoys surfing, running, gardening, traveling, watching football, sampling craft beer, and participating in local government--not necessarily in that order, but close to it. You can follow him on Twitter: @jhibbets
View all posts by Shibby →
This entry was posted in OBX, Raleigh, Sports and tagged half marathon, manteo, nags head, north carolina, OBX, outer banks, Raleigh, running. Bookmark the permalink.