My 20th Half Marathon: Raleigh City of Oaks 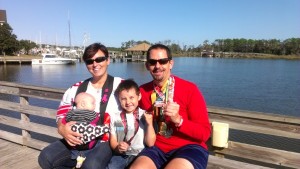 I have so many things to look forward to in late summer and early fall. Football season, good surf in North Carolina, and of course, race season! I maintain my running year round, but really start to focus on training right around Labor Day.

This year was no different. I started doing 10+ mile runs in late August and my training peaked with a 13 mile run in early October. October was a great month to train as the weather cools down here in North Carolina, but the distance caught up with me and I had to nurse some runners plantar fasciitis on my right foot. I somehow managed to still get in 100 miles last month.

On November 3, I’ll be running in the City of Oaks Rex Healthcare half marathon. It will be my 7th year running the race and I’m really looking forward to the course. The weather looks great and after this race, I’ll be focused on the Outer Bank half marathon.

I always love to take a look at my past races. With 19 half marathons and one full marathon under my belt, I can’t wait to cross the finish line to claim that 20th half marathon medal.

Jason Hibbets is a senior community architect at Red Hat which means he is a mash-up of a community manager and project manager for Opensource.com--a publication and story-telling platform for open source communities. At night, he wears a cape, and is a captain for the Open Raleigh brigade, as well as a co-chair for NC Open Pass. Jason is the author of a book called The foundation for an open source city--a resource for cities and citizens interested in improving their government through civic hacking. While writing the book, he discovered his unknown super power of building communities of passionate people. Jason graduated from North Carolina State University and resides in Raleigh, NC with his wife, two kids, two border collies, chickens, lots of tomato plants, and a lazy raccoon somewhere in an oak tree. In his copious spare time, he enjoys surfing, running, gardening, traveling, watching football, sampling craft beer, and participating in local government--not necessarily in that order, but close to it. You can follow him on Twitter: @jhibbets
View all posts by Shibby →
This entry was posted in Sports. Bookmark the permalink.

2 Responses to My 20th Half Marathon: Raleigh City of Oaks