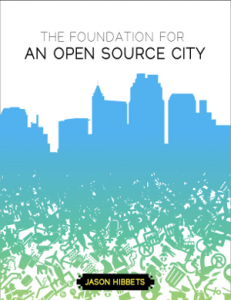 And I’m published! This is it folks. After months of hard work and a longer than anticipated editing process, you can get your official copy of my book, The foundation for an open source city, at Lulu.com.

It tells the story about how Raleigh became an open source city and showcases the open source culture, government policies, and economic development in Raleigh. Beyond that, this book acts as a guide for other cities to pursue their open source city brand.

I will publish the eCopy version later this week after a few minor changes, then I’ll be investigating how I can add both the paper back and epub versions to Amazon and Barnes and Noble.

It’s been an awesome journey. Around mid-December 2012, I woke up one Saturday morning and decided that I should write a book about the open government and open data movements happening in Raleigh. I grabbed my notebook, wrote a few title options, and drafted an outline. I was partially inspired by my neighbor, Rupert Nacoste, who recently self-published the book Howl of the Wolf. I had been thinking about Raleigh’s open source story and I decided to dabble in the world of self-publishing at Lulu.

After I drafted the outline, I sat on the idea of writing a book for a week or two. I shared my book idea with a few folks that were excited and added further inspiration. I told Merri Beth that I wanted to write a book over the holiday break. She said I was crazy and that I wouldn’t get to spend time with the family.

The good news was that I wasn’t writing my book from scratch. I had been living the experience that I wanted to capture for the last two years. I was also able to republish a lot of the articles I wrote for opensource.com because they were licensed under Creative Commons (which provides the ability to re-purpose and re-share the work with the proper attributions).

By late January, I had the first draft completed. I had recruited friend and open source licensing expert Pam Chestek to be my first editor. She did an excellent job making sure the book had a good structure, good flow, things were in the right order, and my attributions were correct.

Then, the hardest part began: technical editing. Jen Wike did a superb job of sifting through the pages, chapter by chapter, line by line, fixing comma’s, hyphenations, there-their-they’re, and many other minor details.

Jen and I swapped edits one chapter at a time. During this process, I decided to run an IndieGogo crowdfunding campaign to drive awareness for my book project. I set my goal at $3,000 and 100 funders. I achieved both of these goals raising more than $4,000 with 106 awesome supporters. Through the campaign, I sold 156 copies of the book. In a social media campaign over the last two weeks and through various events, I sold an additional 34 copies.

That’s right, I have almost 200 copies of my book out in the wild. Over the weekend, I got two encouraging messages. One was a text message…”finally digging into The foundation for an open source city and LOVING it so far.” Then I got a private Twitter message from a friend that said they spotted someone reading my book on a flight to Atlanta. How cool is that?

I’m so stoked that I was able to carve out some time to complete this project. It means a lot to me, that I’m able to share what’s happening in Raleigh and our journey to become an open source city. We have some awesome city staff and volunteer civic geeks that are moving the needle towards more open government.

My goal was to capture Raleigh’s story for the last two years and inspire other citizens and cities to make change happen. Order your copy of the book today to get started. It feels like The evolution of an open source city has already started.