A Partial Solution to the Wake County Bus Problem 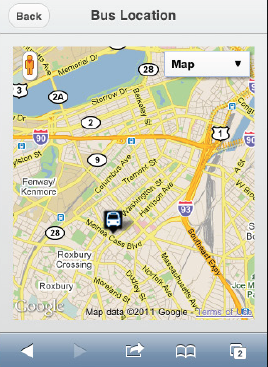 Today, we waited over 30 minutes for the bus. It didn’t arrive until after 9:00am and school starts at 9:15am. Which is kind of late if you ask me. I could have driven my child to school and been back home in less time. It caused me to be late for my first meeting of the day. We need a solution. The tardiness doesn’t just impact the kids, it impacts the parents as well. And while I don’t understand the entire problem, I have a partial solution that can help parents save time and be more efficient.

I work for a local open source company here in Raleigh. My day job involves highlighting how the principles of open source, like collaboration, transparency, and participation can improve our everyday lives. At night, I’m a civic geek helping out with initiatives like CityCamp Raleigh where volunteers look to improve civic participation using various technologies.

In my work, I’ve become interested in the open government movement. And that has lead me to become familiar with an organization named Code for America. One of their open source projects is called “Where’s my school bus?” The city of Boston successfully deployed the application. Their problem stemmed after a big snow storm and the school system had over 3,000 calls about the status of buses in a week. Sound familiar?

As I understand it, the project is open source which means the source code is available to be re-used and modified if needed. There are no license fees to use this application, so Wake County Schools doesn’t need to purchase any software and would need to do two things:

The results? Parents would be able to use the Where’s my school bus? application to monitor the progress of their child’s school bus. We can be more efficient with our time and make sure our children don’t miss the bus and that parents are on-time in the afternoon for drop-off.

What do you think? Is this something Wake County Public Schools can investigate and deploy? It’s a partial solution to the overall problem, but I think it would be well-received by parents across the county.

Jason Hibbets is a senior community architect at Red Hat which means he is a mash-up of a community manager and project manager for Opensource.com--a publication and story-telling platform for open source communities. At night, he wears a cape, and is a captain for the Open Raleigh brigade, as well as a co-chair for NC Open Pass. Jason is the author of a book called The foundation for an open source city--a resource for cities and citizens interested in improving their government through civic hacking. While writing the book, he discovered his unknown super power of building communities of passionate people. Jason graduated from North Carolina State University and resides in Raleigh, NC with his wife, two kids, two border collies, chickens, lots of tomato plants, and a lazy raccoon somewhere in an oak tree. In his copious spare time, he enjoys surfing, running, gardening, traveling, watching football, sampling craft beer, and participating in local government--not necessarily in that order, but close to it. You can follow him on Twitter: @jhibbets
View all posts by Shibby →
This entry was posted in CityCamp, Neighborhood, Open source, Raleigh, Technology and tagged CfA, code for america, GPS, open source, Wake County, WCPSS, Where's my school bus?. Bookmark the permalink.