It’s the time of year when I keep one eye on the tropics for potential surf-generating storms. I’ll glance at the Atlantic Ocean swell models a few times a week and see if it’s time wax up the surfboard for a coastal get-away. This week was no different, except there are two reasons to further investigate: Tropical Storm Isaac and Tropical Depression Joyce. 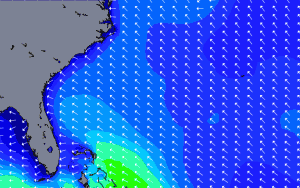 Towards the end of last week, I was seeing some favorable conditions in the forecast. At first, it looked like Joyce was going to deliver this coming Tuesday, but more recent swell models have changed. However, on Friday, the forecast was looking good for the weekend. It looked like long-period swell would be arriving in North Carolina starting on Saturday. I was zeroing in on Topsail Island.

The forecast for Saturday, August 25 was 2.5 feet at 10 seconds, improving to 3.5 feet at 11 seconds for the afternoon. Translation please. Every 10 seconds, the difference in height from the beginning of a swell to the end of a swell would be 2.5 feet. OK, and that means… for the surf this typically means waist to stomach high waves. The winds were offshore (blowing from the land toward the ocean), meaning surface conditions for the waves should be clean.

I made the decision to head to Surf City Pier at Topsail Island on Saturday. On Friday evening while Merri Beth was enjoying a concert with her friend Ginnie, I packed the car and got prepared for an early morning departure. Totally unrelated, I watched some pre-season NFL and the Chicago Bears squeaked out a win over the New York Giants. 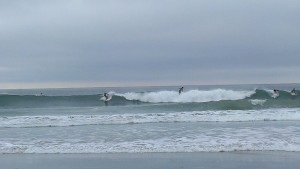 I was up at 6:15 am on Saturday morning. I made my final preparations for a full day of surf and tried to help out with a few things around the house for MB before I left. I checked the early morning report from Wrightsville Beach and the waist high, clean surf looked worthwhile. I was on the road by 7:00 am.

I arrived in Surf City just after 9:00 am and immediately checked the surf. I liked what I saw and was in the water by 9:15 am. It was a little crowded in the water but there were enough waves to go around.

While I was in the line-up, I saw what I believed to be a manatee. I thought it was a seal at first, but after doing to searching, I’m pretty confident it was a manatee. The animal gently breached the surface, spit out some ocean water, got a breath of air, and went on its way. It didn’t look interested in me at all, but I kind of freaked out for a moment. I had never seen anything like that, six feet away from me I might add, in the water. Very cool. Better than seeing our friends in the grey suits.

The weather at Surf City Pier wasn’t all that pleasant for beach goers. To be honest, I was a little chilly. I wore my long-sleeve rash guard. It was overcast and looked like rain or potential rain was all around us. The offshore winds added a slight chill to the air. Thankfully, the water was nice and warm. 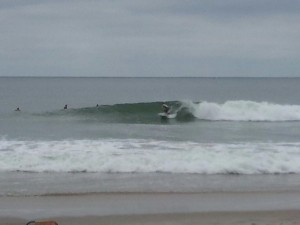 I was catching some good waves and the surf was a solid stomach to chest high with a few bigger set waves coming in. It was low tide when I arrived and the tide was starting to fill in. The best wave for me was a shoulder high set wave. I went left and was able to get three to four moves in before it fizzled into white water. I got a great bottom turn and came up for a nice little backside snap off the top, sending a nice spray off the lip. Then I continued down the line for a few more carves and ended with a little fist pump. Good stuff!

I was catching some great waves and then noticed my arms were starting to get tired. I caught a wave in and went to the car to get my lunch. It was 12:25 pm. Wow, I had just surfed for three hours. No wonder my arms were tired. At that point, I was debating whether or not to call it a day. The surf was changing a bit with the tide and getting a little funky. I decided to eat my lunch on the beach, watch the surf, and then make my final decision.

As you can guess from the title of this section, I paddled back out. I gave the arms a rest and decided to go out and catch a few more waves, taking it easy and being a little more strategic (picky) about the waves I caught. The line-up had thinned-out somewhat and there was no need to be as aggressive as earlier.

The surf had increased in size as predicted by the swell model. It was now solid chest high with head high sets and probably a few bigger ones coming in. There was still some great lines to play with and a few barrels to be found.

I was supposed to surf with my friend Todd Fischer who made the trip today as well. He finally found me around 1:00 pm and was leaving. He was here with a few other folks and they needed to return to Raleigh. I found out that they had surfed just a few peaks down, but we missed each other in the water. He did grab a few pictures of me:

I surfed for another two hours, mostly catching some of the bigger waves coming through, conserving as much energy as I could. There were a few big set waves that were closing out, but I didn’t mind. A few mini-rhino chasers will keep you feeling young.

More friends from Raleigh were in the area. David Huff and crew saw my Facebook post and stopped by to see me. The beach conditions had improved since this morning. The sun was trying to come out from behind the clouds and it was a lot warmer. It was nice to chat with them for a few minutes on the beach and I returned to the water.

I finally got out of the ocean around 3:00 pm. I was exhausted. I logged five hours of surfing today and the two hour drive home is always tough after a long day in the water. Luckily, I made good time on I-40 without that much traffic and was glad to see the family when I arrived at Ramsgate Manor.

Wax on, wax off

Being a surfer in Raleigh is tough. But we have some great technology and tools that help us make the right call. Today was one of those days where a combination of my instinct, surfing experience, and ability to understand the swell data paid off. I scored some great waves and it was well worth the trip.

Some people think I’m crazy to drive two hours to the beach, surf, then drive two hours back. But I love to surf, and those four hours in the car are really just part of the adventure. I don’t mind it when the surf is firing, like it was yesterday in Surf City, NC.