This is the story of baby Coco’s arrival. Quite an adventure for the Hibbets family. 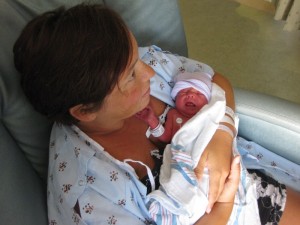 As many of our friends, family, and co-workers already know, we got a wonderful surprise during the early morning of July 27. After a long day of work, Merri Beth started having contractions while we were preparing dinner—but she didn’t think they were contractions. We ate dinner as a family and I got some late-night work done while MB was catching up on some True Blood, trying to fight the pain. I went to bed shortly after midnight and was awakened by MB just after two in the morning. Our lives were about to change.

We arrived at the Rex Hospital just after 3:00 am. We went straight to triage for analysis. Signs were looking good. The doctor came in and wanted to do a full exam, so Zander, who was in his PJ’s, and I left for the waiting room on the second floor.

Merri Beth has a different version of the story, so we’ve pieced together our collective experiences.

She and Coco were being monitored—things were OK. The initial exam allowed them to move her out of triage. Zander and I were out in the hall (aka the patient waiting area). MB was moved to a labor and delivery room. They gave her some magnesium, which was supposed to make the contractions stop, but they seemed to make them worse.

I completed a fair amount of paper work while Zander and I were waiting. We were finally called into the room.

No sooner than 12 seconds in the room did things go from mild chaos to organized chaos. As we walked in, Z climbed into the chair. Apparently, Coco’s heartbeat dropped and the doctor called a code green.

I made a quick tent for Zander out of the blanket we had. He was in the chair and needed to be distracted. The tent worked great for a make-shift, full body blindfold.

Meanwhile, medical professionals swarmed in and Merri Beth was taking off jewellery. The doctor made the call to take Coco. I stood back out of the way, wondering what was happening. Merri Beth was carted off to the operating room (OR) and Zander and I were left with two nurses. One nurse took me down the hallway, and another would watch Zander.

I was taken to a small room while MB went into surgery.

Merri Beth was relocated to the OR for an emergency C-section. The magnesium was giving her flu-like symptoms. And she immediately broke into a sweat. The staff was ready to put her under to perform the C-section. They told her the IV needle would start to sting. And it did.

They started to administer anaesthesia to put her to sleep. She was asleep for the entire operation, so she doesn’t remember anything. They used local anaesthesia in the incision area. She was out and wouldn’t remember much until a few hours later.

The doctor was performing the C-section. After they cut the uterus, Coco’s feet came out and the uterus clamped down, which explains why Coco’s feet were so bruised. The doctor had to make a vertical cut through the thickened uterus wall. In just a few minutes, Coco would arrive.

It’s 4 am in the morning 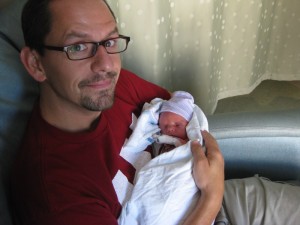 Coco was born at 4:25 am. She was 4 lbs, 12 oz, and 18″ long. Shortly after that, the staff retrieved me from the small room I was in. We picked up Zander as we made our way down the hallway to the special care nursery (SCN). Coco was in a small incubator box (isolette) and a nurse was helping her breathe.

Zander and I watched Coco while the staff connected her to various wires and gadgets. We stayed with her for about 30 minutes before the doctor arrived to give us an update. MB would be in recovery for the next two hours.

Zander and I went home. It was 5:00 am. We grabbed some breakfast, let the dogs out, watered the garden, and packed some bags. We were back at the hospital around 7:00 am in our new (hotel) room. Soon after, Merri Beth arrived, groggy, but doing well.

Jim and Beth Blackwell (MB’s parents) arrived with her sister, Jenni to visit. All of us helped MB recover throughout the day. I got a chance to see Coco. She was breathing well and would soon be off the ventilator.

Coco progressed throughout the day. MB finally got a chance to see her before the day was over. She’s so tiny, but showing great strength.

The Next Two Days

Saturday and Sunday were a blur. Merri Beth was recovering well and was up and walking by Saturday afternoon. We made many visits to see Coco. She was improving. Breathing on her own, but she needed UV treatment. 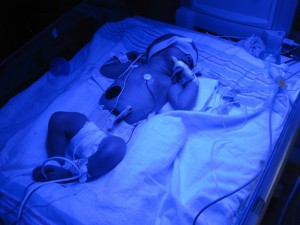 MB and I watched on Saturday night during a thunderstorm as Coco took her first 5cc’s of breast milk. Amazing. It’s just awesome to watch her, even though there isn’t a lot going on.

By Sunday morning, Coco was sporting her Bono U2 glasses under the UV light. She looks like she enjoys getting her tan under the blue lights. She’s now breathing on her own without any support.

Well, sort of screaming. Coco doesn’t make much noise right now. I’ve seen variations of hiccups and a few small cries when she shifts around. She’s fun to watch. Enjoy this short video of baby Coco.