And the Fall 2012 race season has begun

The Fall race season kicked off this weekend with the City of Oaks Marathon. I ran my 15th half marathon, The Rex Healthcare half marathon.

This race is always interesting because of daylight savings—usually plenty of rest! But daylight savings seems pretty pointless in the 21st century, but regardless, we still have to deal with the false sense of time change. (That’s for you Damon!) 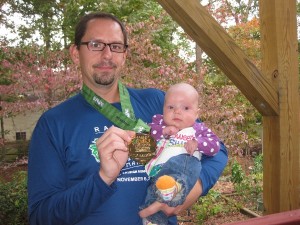 At about 5:00am in the morning, the sound of thunder woke us up. Who ordered the race day thunderstorm in the early morning? The rain kept the temperatures up. The predicted 38º ended up being 42º – which was fine by me.

Mom, MB, and Caitlyn were on-hand to watch the race. They saw me start under the NC State Belltower, then were at the 10k finish line (6.2 miles) to send me off for the remainder of the half marathon.

I finished the half marathon in 1 hour and 43 minutes. Not quite a PR, but no complaints with the injuries I’ve had. I’m very happy with my time and feeling very confident for the next race.

Next weekend, I run the Outer Banks half marathon for the second time. Last year, I ran the Pamlico Jack Challenge, an 8K on Saturday and the half marathon on Sunday. This year, I’m just focused on the half.

On Thanksgiving Day, I’ve been running an 8k turkey trot. I’m changing things up this year and got one of the last slots in the Skinny Turkey. The race is in North Raleigh and I’ve never been on the course before. It should be interesting!

Let’s take a look at my past race history. 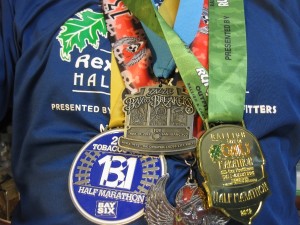 Jason Hibbets is a senior community architect at Red Hat which means he is a mash-up of a community manager and project manager for Opensource.com--a publication and story-telling platform for open source communities. At night, he wears a cape, and is a captain for the Open Raleigh brigade, as well as a co-chair for NC Open Pass. Jason is the author of a book called The foundation for an open source city--a resource for cities and citizens interested in improving their government through civic hacking. While writing the book, he discovered his unknown super power of building communities of passionate people. Jason graduated from North Carolina State University and resides in Raleigh, NC with his wife, two kids, two border collies, chickens, lots of tomato plants, and a lazy raccoon somewhere in an oak tree. In his copious spare time, he enjoys surfing, running, gardening, traveling, watching football, sampling craft beer, and participating in local government--not necessarily in that order, but close to it. You can follow him on Twitter: @jhibbets
View all posts by Shibby →
This entry was posted in OBX, Raleigh, Sports and tagged half marathon, north carolina, OBX, running, Skinny Turkey, Turkey Trot. Bookmark the permalink.

3 Responses to And the Fall 2012 race season has begun