How we spent Thanksgiving 2012 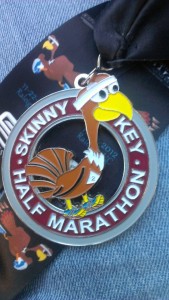 The race started at 7:30 am and it was a 30 minute drive from the house to Wakefield High School, where the race started and finished. I was awake early, around 6:00 am, leaving the house by 6:45 am. I decided to run in long sleeves because it was below 40° and a bit breezy. The course was hilly but manageable. I was expecting a decent time and was happy with the 1 hour 44 minute and 14 second finish.

The Skinny Turkey was in it’s second year and gathered over 700 runners for the half marathon. I finished 74th overall and 56th in the men’s division. I finished 11th in the 30-34 age group. Not bad for a Thanksgiving day run.

I arrived back at the house around 10:00 am to some slight chaos. Merri Beth was dealing with both kids and one of the dogs decided it was warmer in the house and used the bathroom, literally, right before I walked in the house. Sigh. We managed to get everything cleaned up, MB finished the mac and cheese dish she was cooking for Thanksgiving lunch, and we were out the door shortly after 11:00 am.

We were off to Grandma’s house near Clarkton, NC. It was about a two-hour drive for us. Once we arrived, we were greeted by a bunch of family. The Atkinson family was fully represented. Jim and Beth Blackwell were there along with Jenni and Buddy Currie and Jamie, Robbin, and Ethan. Uncle Johnny, John, and Kevin Atkinson were down from Virginia. Uncle Bruce, Karen, Nikki, and Nikki’s boyfriend Eric, were also there. It was a full house with lots of good food.

We hung out for a while, enjoying the family updates, the food, the dessert, and everyone getting to meet Caitlyn for the first time. Especially Grandma. On the way home, we enjoyed the holiday lights in the country sides of NC as we drove home where we kicked off our own Margarita Thanksgiving while we watched some football to cap off the day.

No early morning shopping for us. Zander went to the farm with Jim and Beth and we slept in. My day was spent in the yard. Collecting leaves and getting the yard ready for winter. It really wasn’t that exciting, but there was a lot of yard work to be done.

Meanwhile, MB spent most of the day inside doing some laundry, cleaning, and taking care of Caitlyn. They came outside to help in the garden and picked the last of the peppers growing before the first hard freeze of the season tomorrow. Later on in the afternoon, we headed out for some late day shopping. We went to Lowe’s and I got a new chainsaw. We weren’t looking for huge deals, just being realistic. After we got home, we started a fire out back, cooked some pizza, and enjoyed some wine. It was a perfect evening to spend outside with a warm fire. 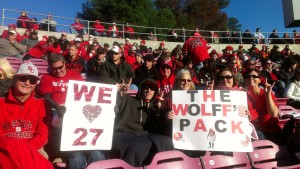 We slept in again, kind of. I was up and in the garden, removing pepper plants and packing up the tomato/pepper cages. Then I was off for a five mile run. By the time I returned, MB had a batch of game-day chili going, corn bread muffins, and we were packing up the Jeep for today’s NC State tailgate.

We headed out to Carter Finley Stadium for Senior Day and NC State’s final home game of the season. Jim and Beth Blackwell brought Zander back from the farm, Jenni and Buddy brought MB’s cousin John and Buddy’s brother Jed to the game. We had an awesome tailgate. Steamed oysters, Beth’s gumbo, and a good time at our pre-game tailgate.

The Wolfpack put on a good show, beating Boston College 27-10. It got pretty cold during the second half, but we survived. There was an awesome post tailgate with the family. More oysters, MB’s chili, and staying warm. There wasn’t a lot of traffic once we packed things up and it was a good end to our football season.

It was a lazy Sunday to round off our four-day weekend. A big cold front came through last night and the temperature’s dropped into the high twenties. Ca-burr. Our day was mostly spent watching football, putting up the Christmas tree, and vegging out. Luckily, we scored the New York Giants game for Sunday Night Football. The Giants dominated the Green Bay Packers, so it was a good game to watch.

Jason Hibbets is a senior community architect at Red Hat which means he is a mash-up of a community manager and project manager for Opensource.com--a publication and story-telling platform for open source communities. At night, he wears a cape, and is a captain for the Open Raleigh brigade, as well as a co-chair for NC Open Pass. Jason is the author of a book called The foundation for an open source city--a resource for cities and citizens interested in improving their government through civic hacking. While writing the book, he discovered his unknown super power of building communities of passionate people. Jason graduated from North Carolina State University and resides in Raleigh, NC with his wife, two kids, two border collies, chickens, lots of tomato plants, and a lazy raccoon somewhere in an oak tree. In his copious spare time, he enjoys surfing, running, gardening, traveling, watching football, sampling craft beer, and participating in local government--not necessarily in that order, but close to it. You can follow him on Twitter: @jhibbets
View all posts by Shibby →
This entry was posted in News, Raleigh, Travel and tagged football, holiday, NC State, north carolina, Raleigh, running, Skinny Turkey, Thanksgiving. Bookmark the permalink.