The new challenge for Code for America Brigades 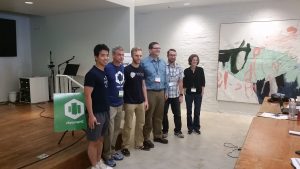 Anyone in the midst of the civic hacking movement knows that change is in the air. And this is not a bad thing. By far, it’s one of the most interesting times to be involved in this movement. Civic hackers are becoming more focused, more efficient with resources, and partnering with organizers where they can have the biggest impact.

One of these organizations that is near and dear to my heart is Code for America. I am a Code for America brigade captain in Raleigh, North Carolina at Code for Raleigh. We were one of the earliest brigades to join the program and change has been constant as we’ve navigated these civic hacking adventures together. My experience has been amazing so far.

A team of volunteers from Code for Raleigh recently wrapped up our annual civic hacking event, CityCamp NC. We had over 200 people attend, there were 10 teams working on projects that would improve our communities, and we were fortunate enough to have Jen Pahlka, Founder and Executive Director, Code for America, join our event as a keynote speaker.

Jen was more than just an inspiration and speaker to us. She was eagerly seeking feedback from the NC civic hacking community. Yes, Jen came and delivered an amazing keynote telling about some of the success stories from Code for America, but she also shared some of the challenges. Jen came prepared to listen and participate, not just tell us her thoughts. She helped lead an unconference session on sustainable civic hacking. It was well attended and there were a variety of voices speaking up. And Jen tool lots of notes.

I’d like to share one observation about Jen’s visit to North Carolina. She wasn’t just attending our event to tell us what was happening or what she was seeing across the broader civic hacking movement. She came to listen. She came to immerse herself. For me, this is one of the ultimate signs of a great leader. I’m really glad Jen was able to attend, participate, and get the feedback she was looking for.

It’s an interesting time for Code for America. There is rapid growth and expanding interest in the brigade program sweeping the nation. The challenge? How do we scale this program while at the same time offer the right kind of support. And I say “we” very strategically. While I am not a member of the Code for America staff, I consider myself part of the Code for America family. Hopefully, I’m not the weird cousin.

While voting ends on September 30, the adventure is just beginning. I look forward to participating in any capacity and being an advocate to help solve this new challenge that civic hackers like myself and others face.

We live in very interesting times. Civic hacking is at a point where we need to pivot in order for us to take on the challenges of the future. And these challenges aren’t things that one individual or one organization can solve on our own. It’s going to take a network of really smart and dedicated people to advance this movement.

Be sure to vote. And if you miss the deadline, send us your feedback.

Jason Hibbets is a senior community architect at Red Hat which means he is a mash-up of a community manager and project manager for Opensource.com--a publication and story-telling platform for open source communities. At night, he wears a cape, and is a captain for the Open Raleigh brigade, as well as a co-chair for NC Open Pass. Jason is the author of a book called The foundation for an open source city--a resource for cities and citizens interested in improving their government through civic hacking. While writing the book, he discovered his unknown super power of building communities of passionate people. Jason graduated from North Carolina State University and resides in Raleigh, NC with his wife, two kids, two border collies, chickens, lots of tomato plants, and a lazy raccoon somewhere in an oak tree. In his copious spare time, he enjoys surfing, running, gardening, traveling, watching football, sampling craft beer, and participating in local government--not necessarily in that order, but close to it. You can follow him on Twitter: @jhibbets
View all posts by Shibby →
This entry was posted in CityCamp, Technology and tagged CityCamp NC, civic hacking, civic tech, code for america. Bookmark the permalink.