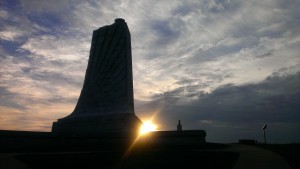 I was up early today to enjoy this cool, October-like weather on the OBX. I decided to get in a 5.8 mile sunrise run to the Wright Brothers Memorial and back. The air was brisk and void of humidity, which meant I could actually breathe while running. I headed down Bay Drive, then over to First Street and along the trail leading to the Wright Brothers National Park. As I turned the corner from the airport, I had to stop and take some pictures. As I ran up the monument trail, I had to take more.

I had a great run, despite stopping for amazing pictures. When I got back to the house, it was time to get ready for surf camp. I had checked the surf report online and was concerned that camp would be cancelled again due to choppy, unsafe surf. But surf camp was on, just at a different playing field.

Once we arrived at Farmdog Surf School, we were informed that the kids were going Soundside today. I drove Zander over to the Sound access beach near Jockey’s Ridge where we met the instructors and other campers. The instructors had a variety of activities planned for the day. I had to get some work done (but secretly wanted to play in the Sound with the campers). 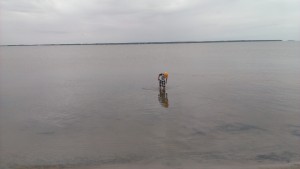 After a few calls and lots of email, I went back to the surf camp and heard about all the fun the kids had. Today’s adventures included Stand-up Paddle boarding (SUP) and sand surfing. For those of you not familiar with sand surfing, it’s when you take the fins off a surf board and glide down a sand dune. Jockey’s Ridge is the perfect set-up for this.

In fact, back in the day when I was in high school, we would go sand boarding. We would take old skateboard decks (or buy new ones) and attach wind surfing straps to the top. Then we would go to Jockey’s Ridge or Run Hull with a pocketful of parafin wax and carve down the sand dune and make jumps at the bottom or along the dune. Now, imagine doing that with a finless surfboard.

After a great day at camp, Zander and I made a pit stop at the beach. I scored a few waves at Martin Street while Zander got some skimboarding in. After my last work call for the day at the beach house, Zander and I headed back to the beach for some boogie boarding. The wind was still blowing northeast, which meant choppy surf and chilly conditions on the beach, but we’ll take what we can get.

The last day of surf camp is coming up, and I’m hopeful that the campers will get back in the ocean. Until then, enjoy some scenes from day four at surf camp, which is really just some pictures I grabbed throughout our day on the OBX. 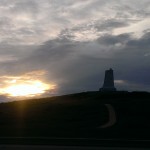 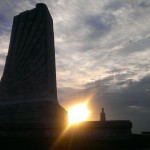 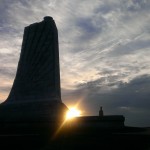 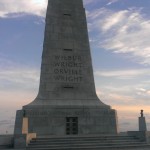 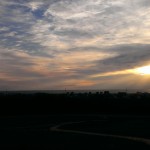 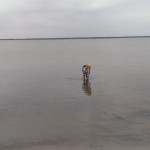 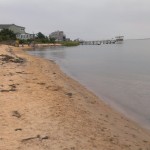 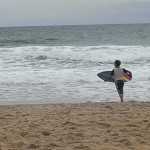