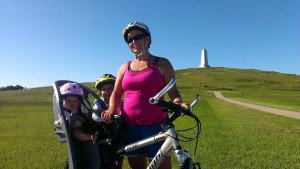 This was it, our last day on the Outer Banks for FOJ. It was Sunday, July 7 and we had a blend of home-sickness but couldn’t pass up another beach opportunity. We had a great Saturday, enjoying all day on the beach. While we wanted to do the same today, it wasn’t in the cards. Instead, a condensed version of what we’ve been doing most of the week was in store.We started off the day with a family bike ride and ended up getting in an easy 9 miles. Our route took us to the Wright Brothers Memorial and we even checked out the markers for the first four flights—the fourth flight being 59 seconds and 852 feet. We biked it!

After our bike ride, we beached it. Our trip was minimal, but I did manage to get a few waves. I had my shortboard today, but the tide was a little high and made the waves hard to catch. I snuck into a few, but that chilly water was back and made the waiting inbetween sets that much longer.

Zander was boogie boarding and skim boarding again. It was the perfect day for him to be on the water. Merri Beth and Coco were soaking up the sun. 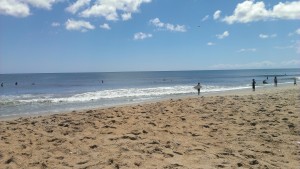 After two hours at the beach, we hit up the pool. It was time for Coco to get in the water and splash around some. Zander also enjoyed swimming around in the pool. But our time was expiring. We had to get back to the beach house and start packing things up. We wanted to get back to Raleigh with enough time to get ready for the work week.

Packing seemed to take forever. I’m not sure how we managed to pack this much stuff for a week at the beach, but we were pretty stuffed on the drive back. The dogs were a little cramped, but they survived.

We said our thank-you’s and good-byes to Nana, then started on our three hour trek back to city life. It was hot out there today too, temperatures were in the 90’s and the sun was in our face most of the ride back. The first half of the trip involved both kids napping…and I’m pretty sure MB caught a few z’s too.

Once we got home, we unpacked and started laundry. MB went out for some pizza and beer, while I stayed home to do some yard work. The new St. Augustine turf was doing great with all the rain we’d been getting. It was the first time being mowed and it was much needed.

With nine days on the Outer Banks, we were ready to be home. But mentally, I’m still living the beach life. And that’s our chapter on OBX sandbars and board shorts. Until next time. 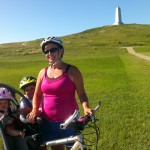 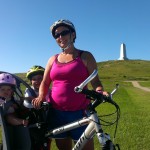 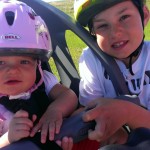 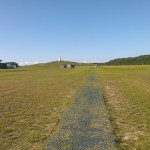 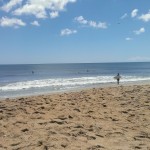 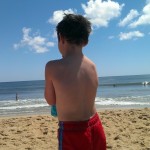 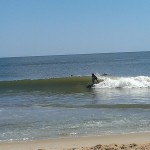 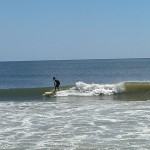 Jason Hibbets is a senior community architect at Red Hat which means he is a mash-up of a community manager and project manager. At night, he wears his cape and is a captain for the Open Raleigh brigade, as well as a co-chair for NC Open Pass. Jason is the author of a book titled The foundation for an open source city--a resource for cities and citizens interested in improving their government through civic hacking. While writing the book, he discovered his unknown superpower of building communities of passionate people. Jason graduated from North Carolina State University and resides in Raleigh, NC with his wife, two kids, two border collies, chickens, lots of tomato plants, and a lazy raccoon somewhere in an oak tree. In his copious spare time, he enjoys surfing, running, gardening, traveling, watching football, sampling craft beer, and participating in local government--not necessarily in that order, but close to it. You can follow him on Twitter: @jhibbets
View all posts by Shibby →
This entry was posted in OBX, Travel and tagged beach, bike, outer banks, pool, Raleigh. Bookmark the permalink.