Life in Board Shorts Day Five – Fourth of July 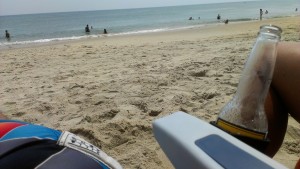 Oops, we slept in today. Not typical for us. We were out a little later than expected last night at Elizabeth’s Cafe. We’re usually pretty eager to get on the beach early on the Fourth of July. Merri Beth, Zander, and I managed to get to the beach by 11:00 am—not too bad considering our lack of alarm clock.

We packed up the Jeep, lunch included, and headed out. At first, I was thinking Nags Head would be the spot. But as we drove down the beach road, the beach accesses were packed. We turned around and headed back to Kill Devil Hills for the day. We found a great spot that just had a few cars at it. Within the next two hours, it was full. We got lucky.

We set-up our spot for the day and reminisced about Fourth of July’s past. Today just wasn’t the same, but we enjoyed our family time together. Zander enjoyed a mixture of boogie boarding, swimming, and snorkeling for most of the day.There might have been a time-out or two in there. But for the most part, Zander had a great day at the beach. 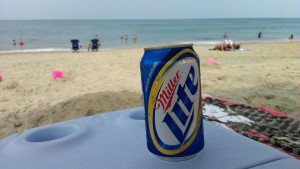 The Fourth of July is absolutely one of my favorite holidays. I’m not sure if it’s the fireworks at night or the long day on the beach, but for me, it’s complete awesomeness.

The family enjoyed lunch on the beach. After that, it was Miller Time.The reality of the situation is that the family was just enjoying time together.

Zander and I tried to go snorkeling, but the water was too cloudy. Monday was definitely a blessing for us to snorkel in the ocean. The remaining part of the afternoon was bliss. We avoided flies on the beach by moving our beach chairs closer to the water. MB and I enjoyed our time in the ocean, as well as watching Zander play in the ocean.

After a long day at the beach, we got back to the beach house to put some burgers on the grill. After dinner, we were looking to head back to the beach in Nags Head to watch the fireworks. Tony and Melissa were interested in going with us.

On the way to Nags Head, we picked up our friends down on Clam Shell Drive en route to see the fireworks. Tony and Melissa hopped in the Jeep and we were bound for Barnes Street.

The beaches were packed with spectators. We ended up parking on the in-between road and walking down to Barnes Street. We found a great little spot on the beach and settled in. We had about 30 minutes before the show started. I had some gigantic sparklers that we lit to pass the time.

Jason Hibbets is a senior community architect at Red Hat which means he is a mash-up of a community manager and project manager. At night, he wears his cape and is a captain for the Open Raleigh brigade, as well as a co-chair for NC Open Pass. Jason is the author of a book titled The foundation for an open source city--a resource for cities and citizens interested in improving their government through civic hacking. While writing the book, he discovered his unknown superpower of building communities of passionate people. Jason graduated from North Carolina State University and resides in Raleigh, NC with his wife, two kids, two border collies, chickens, lots of tomato plants, and a lazy raccoon somewhere in an oak tree. In his copious spare time, he enjoys surfing, running, gardening, traveling, watching football, sampling craft beer, and participating in local government--not necessarily in that order, but close to it. You can follow him on Twitter: @jhibbets
View all posts by Shibby →
This entry was posted in OBX, Travel and tagged beach, fireworks, FOJ, fourth of july, north carolina, OBX, outer banks, vacation. Bookmark the permalink.