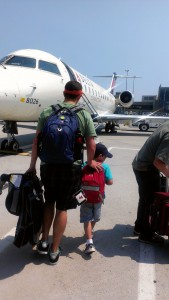 Our 10-day vacation on the Outer Banks started last night when the family flew to Norfolk after a week in Boston for the Red Hat Summit and JBoss World. We landed just in time to experience some 5-o’clock traffic in Hampton Roads area of Virginia. We took our time and eventually made our way to Kill Devil Hills, NC for the evening.

Along the way, we stopped in Currituck at a local produce stand to get some fresh fruit and veggies. We walked out with blueberries, peaches, plums, squash, zucchini, and sweet corn. On the way towards KDH, we wanted to grab dinner at Weeping Radish, but they were closed when we passed. Bummer! Instead, we got some Mexican at La Fogata in Kitty Hawk.

Day One On the Outer Banks 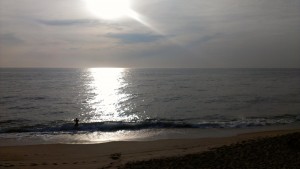 We were up early this morning and I did a quick surf check at First Street in Kill Devil Hills at 7:00 am. I cruised on over on the bike and saw it was a beautiful beach day. We decided to hit the beach in Nags Head for the day. I skipped a run because it was already 80° out. The Jeep was packed and we made a quick stop at Food Lion for some lunch and snacks on the beach. After we arrived in Nags Head, we set up the tent and enjoyed the day.

The tide was low and I noticed a few waves breaking (small surf, about 2-3 foot), but still a little bump. I didn’t pack a board in the Jeep, so I drove back to the beach house to get my 7’10” fun board. Once I made it back to the beach, I paddled out and caught a few waves. While out on the sandbar, I noticed the water was crystal clear. I paddled back in to get Zander, he’d probably like seeing the sandbar and catching some waves.

I took Zander out to the sandbar, tandem style, he had his boogie board and I paddled us out to the break on my board. We caught a few waves, saw three skates, caught a few more waves, then paddled in. He was excited to be that far out in the ocean.

The rest of the day was spent on the beach, in the water, and being annoyed by the younger folks blasting their music next to us. Unfortunately, with a bunch of space on the beach, about six younger folks set-up camp in front of us and decided to play their music, louder than they should have, for the majority of the day. The part that killed me is that they would turn up the tunes, then get in the water, play football, or move their chairs closer to the water. Really? Not cool.

Despite our musical interlude, we had a great day at the beach. Even though it was unbelievably hot across the most of the country, we enjoyed a nice North East breeze for most of the day keeping the temperature around 90°. I was actually chilly at one point during the day. After the sun started to set and the wind settled down, it started to get hot! 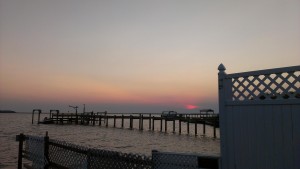 After our day at the beach, we went back to the house and unpacked the Jeep. We took some showers and got ready for dinner. Merri Beth and I went to Food Lion to do some shopping for the week. We got back and cooked chicken and a zucchini & red onion medley for dinner. Mom made some mashed potatoes. Dinner with the family was fabulous!

After we ate, Zander enjoyed a Jolly Rancher popsicle, then we went to see the sunset. Merri Beth decided to take a walk, while Zander and I took the bikes. The sunset was nice, but there was some interference with some low-lying, horizon clouds. None-the-less, a great sunset. That wrapped up our first full day here on the Outer Banks. Tomorrow looks like it’s gonna be a hot one too.