Do you name your GPS? 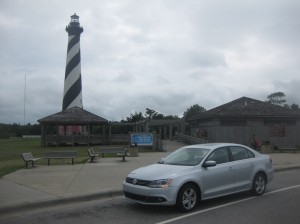 A few summers ago, when Merri Beth and I were on a trip to New York City we rented a car and got a GPS navigation system. We thought it would be fun to name the GPS–we wanted to yell at it when it gave us bad directions. We continued the tradition on a trip to Boston two years ago when we drove to Westford for the day.

I’ve had my VW Jetta for just over a year now and still hadn’t given my GPS an official name. I toyed around with some German names. I even did some research on names related to guides, explorers, and navigators. Nothing really jumped out. I almost crowdsourced naming my GPS over social media but that sounded like a lot of work. Then this past weekend, it happened.

We took a day trip to Topsail Island–an early Mother’s Day treat mostly because the weather on Saturday looked nicer than Sunday. On the ride to the beach, MB mentioned that she has potentially named her navigation system Helen. (South Park reference.) It got me thinking about my GPS. We toyed around with a few names, but didn’t like any of them.

Then I blurted our, Sheila! I loved it. When Sheila barks out directions, I smile and reply back with an Australian accent–”Thanks Sheila, say, did you park a tiger last night?” (Of course she doesn’t reply back.)

Now, if I could just figure out how to make Sheila, my GPS, talk in Aussie, things would be perfect. An we need to get a new name for MB’s GPS. I’m confident, that one day while we’re driving around, it will come to us.

So I’ve got to ask…do you name your GPS? Either your everyday GPS or ones that you rent. And if you didn’t before, will you in the future?

Jason Hibbets is a senior community architect at Red Hat which means he is a mash-up of a community manager and project manager. At night, he wears his cape and is a captain for the Open Raleigh brigade, as well as a co-chair for NC Open Pass. Jason is the author of a book titled The foundation for an open source city--a resource for cities and citizens interested in improving their government through civic hacking. While writing the book, he discovered his unknown superpower of building communities of passionate people. Jason graduated from North Carolina State University and resides in Raleigh, NC with his wife, two kids, two border collies, chickens, lots of tomato plants, and a lazy raccoon somewhere in an oak tree. In his copious spare time, he enjoys surfing, running, gardening, traveling, watching football, sampling craft beer, and participating in local government--not necessarily in that order, but close to it. You can follow him on Twitter: @jhibbets
View all posts by Shibby →
This entry was posted in Home, Travel and tagged GPS, Jetta, Mother's Day, VW. Bookmark the permalink.

One Response to Do you name your GPS?