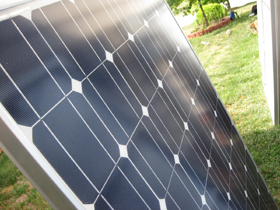 I’m pretty passionate about renewable energy. After I read Thomas L. Friedman’s “Hot, Flat, and Crowded” I was sold on higher prices for gas and putting solar panels on every roof in America. In fact, I was so eager to contribute, I had 18 solar panels installed on the roof of my home.

When I was checking out the energy infographic, “Interactive Transparency: America’s Energy, Where It’s From and How It’s Used” over at GOOD, I was re-energized on the topic of renewable and sustainable energy.

I couldn’t agree more with GOOD’s opening statement: “To fully understand the energy issue, we have to understand how America gets its energy, and how it uses it.” They go on to say that America wastes a lot of energy, 54.5 Q BTU (Quadrillion British Thermal Units) to be exact.

It’s hard to solve a problem when you don’t know what you’re trying to solve. For the energy situation here in America, the talk has been about reducing our dependency of foreign oil, increasing our renewable energy sources, and increasing efficiency of our systems. The infographic clearly shows that there is room for efficiency, with the highest waste in transportation.

Solving these problems all starts with transparency, collaboration, and open data. Looking at the sources from the GOOD post, the data is open and available as public domain from US Energy Information Administration (Department of Energy).

So the data is open, but it takes more than that. The collaboration between GOOD and Hyperakt is important because it makes this transparency useful. Their work makes the information visible and consumable. Most people are not going to look at the raw data from the Department of Energy.

Which brings us back to solving the problem. Open data? Check. Transparent sharing of information? Check. Collaboration to make that information useful? Check. It takes all three to show where we, as a  society, have to focus and move forward with action. When we work together to understand the truth, the answers are right in front of us.

Originally posted on opensource.com on January 6, 2011.

Jason Hibbets is a senior community architect at Red Hat which means he is a mash-up of a community manager and project manager for Opensource.com--a publication and story-telling platform for open source communities. At night, he wears a cape, and is a captain for the Open Raleigh brigade, as well as a co-chair for NC Open Pass. Jason is the author of a book called The foundation for an open source city--a resource for cities and citizens interested in improving their government through civic hacking. While writing the book, he discovered his unknown super power of building communities of passionate people. Jason graduated from North Carolina State University and resides in Raleigh, NC with his wife, two kids, two border collies, chickens, lots of tomato plants, and a lazy raccoon somewhere in an oak tree. In his copious spare time, he enjoys surfing, running, gardening, traveling, watching football, sampling craft beer, and participating in local government--not necessarily in that order, but close to it. You can follow him on Twitter: @jhibbets
View all posts by Shibby →
This entry was posted in Open source and tagged opensource.com, renewable, solar, transparency. Bookmark the permalink.

3 Responses to Transparency in energy usage