The pulse of the Drupal community after 10 years 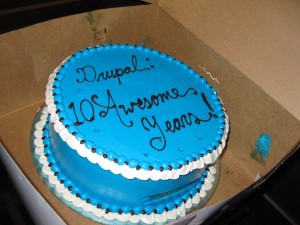 Believe it or not, Drupal is turning 10 years old in 2011. Beyond providing a content management platform that powers millions of websites, Drupal has a thriving user community. And it’s not just coders. There are web designers who work on themes and deployment, content providers, admins, and everyday people who use Drupal for their job, organizations, or self-interests.

The North America DrupalCon is taking place this week in Chicago. To help celebrate the tenth anniversary of the Drupal project, I decided to take a pulse of the culture and community. I found 10 people at the conference and asked them to share their Drupal experiences.

Tiffany has been using Drupal for five years and is the DrupalCon Chicago Chair as well as president of palantir.net. Her company provides solutions for education, corporate, and cultural clients.

On the culture of Drupal, she says: The community is doing a good job of addressing the challenges of growth. We’re able to maintain our welcoming nature while still having opportunities for small group collaboration. We are still trying to make it special for those that are just starting in the community at both big and small events. Here at DrupalCon we have a number of smaller “events” within the larger conference. The challenge is to accommodate for unlimited growth in the community.

One work in progress that came out of the Drupal 7 release was how the community embraced the need for design and UX. We had to rationalize the coder ethos while respecting the design process. It’s incomplete, but in progress.

Read the other 9 stories on opensource.com.

Jason Hibbets is a senior community architect at Red Hat which means he is a mash-up of a community manager and project manager for Opensource.com--a publication and story-telling platform for open source communities. At night, he wears a cape, and is a captain for the Open Raleigh brigade, as well as a co-chair for NC Open Pass. Jason is the author of a book called The foundation for an open source city--a resource for cities and citizens interested in improving their government through civic hacking. While writing the book, he discovered his unknown super power of building communities of passionate people. Jason graduated from North Carolina State University and resides in Raleigh, NC with his wife, two kids, two border collies, chickens, lots of tomato plants, and a lazy raccoon somewhere in an oak tree. In his copious spare time, he enjoys surfing, running, gardening, traveling, watching football, sampling craft beer, and participating in local government--not necessarily in that order, but close to it. You can follow him on Twitter: @jhibbets
View all posts by Shibby →
This entry was posted in Drupal, Open source and tagged community, opensource.com, palantir.net. Bookmark the permalink.