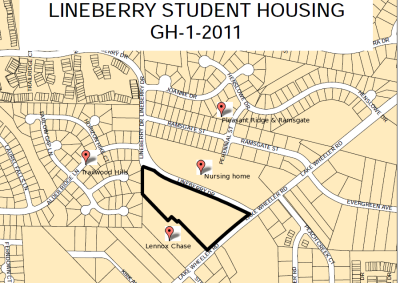 On Tuesday, February 15, 2011, I presented to Raleigh City Council about concerns on the proposed GH-1-2011 project, Lineberry Student Housing. [PDF] GH stands for Group Housing and the project is being administratively approved by Raleigh City Planning.

I started my presentation by giving an overview of the project as I understood it. I told the council I was surprised that this project was targeting student housing when our current zoning doesn’t have a classification focused on student housing. The proposed project would be located at Lake Wheeler Road and Lineberry Drive. GH-1-11 would be four stories in height and have 72 4-bedroom apartments.

The purpose of my presentation to City Council was to

I reflected with Mayor Meeker that I was presenting because I’m a neighborhood expert. The mayor and I recently discussed, in an interview to-be-published, that it’s important to tap into the expertise of the citizens to have a more open government. I’ve lived in my neighborhood for over 10 years and wanted to share some of the problems we’ve been fighting in our area.

I highlighted the other apartment complexes in the Lineberry area and noted the other complexes that were owned by the same company proposing GH-1-11, Priess. I expressed concerns that the project wasn’t providing enough parking, even though it was providing parking beyond what was required in the R-10 zoning. 267 parking spaces are required and 302 are being provided. I told City Council that if every resident has one vehicle (288), that would provide only 14 additional spaces for guests. 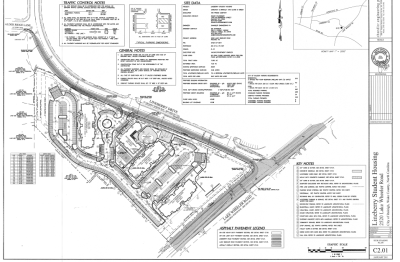 I asked Councilor Stephenson where he thought the other guests would park. I predicted that if this project moves forward, our neighborhoods would be flooded with vehicles. The overflow would go to the nearby nursing home, Lennox Chase, and on our neighborhood streets, mainly, Lineberry Drive, Alder Ridge Lane, and Ramsgate Street. I noted that the Trailwood Hills neighborhood is already facing parking pressures and have had to install no parking zones.

Next I focused on the noise problems that we’ve been facing. Although we’ve see a slight improvement from 2009-2010, I don’t understand why we would allow this type of project to move forward if we are unable to get the current problems under control.

I proposed that 288 new people and 302 parking spaces would create a recipe for more parties and noise. Then I asked if student housing was a good fit if we consider the surrounding uses? Planning seems to focus on the property itself and less on the impact to the adjacent properties.

The area surrounding the proposed GH-1-11 project that would be impacted includes:

My vision for these 7.2 acres is to have a mixed-use development that would have retail on the ground floor and living above. This would not only help make our community walkable, but it would give something back to our community: retail that we desperately need.

I don’t understand why we have a 2030 Comprehensive Plan that designates this property as Neighborhood Mixed-Use and we’re going to allow student housing to go in. We have a good plan for the future, but we don’t want to allow that vision to happen.

I re-iterated that the short-term fix is to table GH-1-11. The medium-term fix is to explore a University District or Institutional Overlay in the UDO.

Minneapolis, MN has implemented a University District Zoning and Planning Regulatory Review (ZPRR). The purpose is to “address land use and development concerns facing neighborhoods in the University District area, including the neighborhoods of Cedar Riverside, Marcy Holmes, Prospect Park, Southeast Como, and University.” The issues Minneapolis were looking to solve are similar to the challenges Raleigh faces. The issues include “parking, occupancy, design standards, zoning, inspections, and public involvement in the development review process.”

Seattle, WA has a Major Institution Overlay District. The purpose is to regulate Seattle’s major educational and medical institutions. The first purposes listed for Seattle caught my attention because they look very familiar. Raleigh should consider this in the UDO. It would not only apply to our major education institution like NC State, but also other institutions with large footprints like Rex and WakeMed. The first three points talk about impact around the development and protecting surrounding neighborhoods: 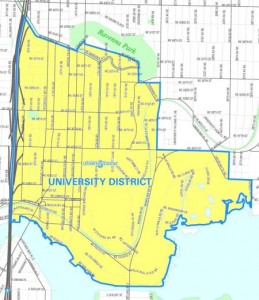 I showed a map of the University District in Seattle that not only includes the University of Washington, but the surrounding area. The area includes both housing and retail opportunities.

I re-iterated that this was a good project in a bad location. The impact to the surrounding uses is not a good fit. As I concluded my presentation, the Mayor and City Council began a long discussion. Staff from the planning department spoke and answered questions.

Because this is administratively approved, there is nothing legal that City Council can do to stop this from moving forward. They are going to request that the developer meet with the South West CAC, but they can not require them to do that.

My request to have a Major Institution Overlay District in the UDO was put into the Budget and Economic Development (BED) committee. I was hoping there was more that the council could do about the project, but it is what it is. I think I brought forward some valid concerns and showed that administratively approved projects need to have a way for public input in certain cases.

I was able to add some closing remarks. I told the Mayor and City Council that the South West CAC is not anti-development, but want successful businesses. I personally want to support new business in our area and want them to be successful. However, a key factor in developments like this being successful includes having the support of the neighborhood. Which right now, this project does not have.

2 thoughts on “Protecting the Neighborhood from GH-1-2011”