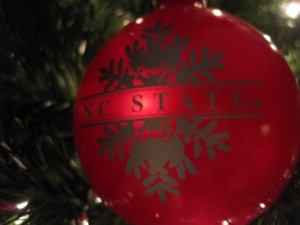 But I want to get one small request in before Santa visits this Saturday.

Dear Santa, can NC State get a bowl victory this holiday season?

That’s all I want. It’s that simple. It can be by one point or 20 points. It doesn’t matter. Just a W in the win column.

I heard on 99.9 The Fan that the Wolfpack had a good practice today. I’m glad to hear that the team is excited for the upcoming game. If only for warmer weather or amusement parks, I think the Wolfpack will show up ready to play in Florida. It will be my third time going to Orlando for an NC State bowl game.

I won’t do a prediction like I did last time. That turned out to be disastrous–as did the NC State at Maryland game. I think it’s ironic that ACC Coach of the Year, Ralph Friedgen, got fired as Maryland’s head coach. I don’t like to see people lose their jobs, but that Freshman quarterback for the Terps has some potential. You should of let NC State win Ralph 🙂

I’m bowl bound with the Pack and all I want for Christmas is a Wolfpack win.