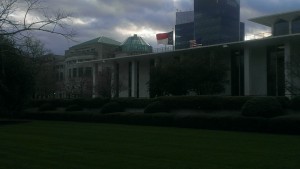 Something is wrong when you begin to lose trust in your government. While we all may not agree with everything that happens at various levels of the bodies we vote to represent and govern us, when the bond of trust comes into question, people get angry. I’m angry at the North Carolina General Assembly (NCGA).

I was speaker number 64 out of over 100 at a NCGA Wake County delegation public hearing on Monday, March 25. But I didn’t get a chance to speak. After two hours, the public hearing ended at speaker 50-something. Over 300 people were in attendance. The room we were in was clearly not designed for a crowd of this size. But people were angry. Civilized, but angry.

There are numerous House and Senate bills proposed that could impact Wake County. I was there to speak in opposition to House Bill 319 and Senate Bill 334 in an effort to “Save Dix Park.” The NCGA wants to break the lease with the City of Raleigh over the Dorothea Dix property. Many business community members and citizens are outraged that the NCGA wants to “back out” of the lease because some of the current representatives think the deal was unfair to the State.

Over the weekend, a few citizens and I started a campaign to drive awareness about this issue and about the public hearing on Monday. We called it “Do you want Dix Park … or a parking lot?” and started a petition that now has over 3,000 signatures. People are angry, and it’s not just the citizens in Wake County. There are supporters of our petition from all across the state of North Carolina.

The essence of the petition is to “preserve Dix Park, honor the past, and celebrate the future.” Citizens supporting the petition oppose the proposed bills to break the lease agreement. This is the trust issue I was talking about. I find it hard to renegotiate a contract when the other party isn’t at the table.

In a way, this post is my chance for me to speak to the Wake County delegation and other NCGA members. Here are a few thoughts that I was going to share:

I believe in open government and transparency and I wanted to thank you for listening to the citizens who spoke. But more importantly, I want you to embrace the citizen participation happening. We may not come to every meeting, but we are paying attention. Don’t violate our trust.

I sometimes question how effective a public hearing can be. I imagine that most elected officials have already made up there mind on how they are going to vote and no amount of words will sway their decision.

The one thing that can sway their vote is a large turnout. And Wake County showed up in force on Monday. I think that sends a clear message to the NCGA that we are paying attention. And we are angry.