One of the latest projects I’m involved with… 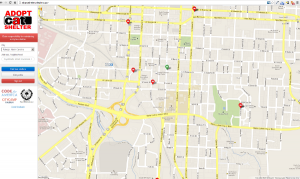 Citizens interested in maintaining and monitoring their favorite City of Raleigh bus shelter now have a helping hand: the Adopt-A-Shelter interactive web application. Adopt-A-Shelter instantly displays the adoption status of all city bus shelters. Code for Raleigh, a recently formed Code for America brigade in Raleigh that includes volunteers from CityCamp Raleigh, deployed the application for use in Raleigh.

Code for Raleigh advocates for existing applications and technology created by Code for America, a national non-profit focused on improving government through technology. Code for Raleigh has recently deployed an Adopt-A-Shelter application at adoptashelter.raleighnc.gov highlighting 184 shelters available for adoption in Raleigh. Citizens can easily sign up for a one-year commitment to help keep Raleigh bus shelters clean for Capital Area Transit (CAT) riders.

“It’s an interactive way for residents to see which bus shelters have been adopted,” said David Eatman, the City’s transit administrator. “We are delighted that citizens from Code for Raleigh have stepped up to offer this technical resource to encourage participation in this City program.”

Code for Raleigh recently entered their Adopt-A-Shelter application in a Code for America Race for Reuse campaign. Only five weeks remain to promote the project and increase the adoption rate. Code for Raleigh hopes to have 20 new shelters adopted by December 6, 2012 to meet their success criteria.

“We think we can double the existing adoption rate from twenty to forty adopters during the campaign,” said Jason Hibbets, a Code for Raleigh brigade captain. “Over the next five weeks, we hope to drive awareness about the bus shelter adoption program and host a civic-athon on December 1 to sign-up new users, add new features, and create Triangle Wiki pages about each adopted shelter.”

There are a few key dates and milestones to be aware of during the Race for Reuse campaign. Code for America brigades across the United States will set campaign goals by Friday November 16. An “engagement day” and civic-athon scheduled for Saturday, December 1 would foster new users and address bug and feature requests to the application. Raleighites can sign-up to attend the event.

The campaign ends on Thursday, December 6, and the Raleigh brigade aims to have the existing twenty adopters included in the new online program and add at least twenty more adopters by the campaign deadline.

About the Adopt-A-Shelter Program

The City’s shelter adoption program began in September.  Adoption requires maintaining the shelter. Those wishing to participate in the initiative can assist in removing trash in and around the shelter area on a monthly basis. City of Raleigh staff will provide adopters with trash bags, disposable gloves and safety vests to assist in the trash removal around adopted shelters. These volunteers also are asked to notify City of Raleigh staff of any special maintenance needs and report vandalism or suspicious activity.

About Code for Raleigh

Code for Raleigh is a Code for America brigade whose mission is to deploy, maintain, and sustain civic technology and open data infrastructure in Raleigh. The brigade is a volunteer group that is part of a national network of civic advocates. Code for Raleigh aims to bring citizens, city government, and businesses together to openly innovate and improve our quality of life through technology. Existing projects include Triangle Wiki, a free, openly-editable, community-centric website for local history, media, and interesting characters. The brigade was formed in October 2012 by CityCamp Raleigh volunteers.

About Code for America