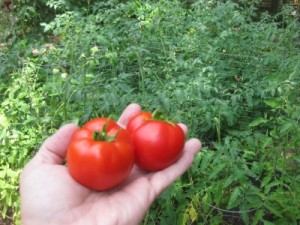 The garden is doing well. Despite being away for most of the month of May, my neighbors helped out and kept things watered and growing. Late last week, the first of green tomatoes started to turn a yellowish-orange. I had a suspiscion that by mid-June, the Early Girls would be ripe.

I could have picked the first of the tomatoes on Sunday, but thought it would be better to let them get a bit more vine ripe for the first batch.

The tomato plants really took off this year and I haven’t even used fertilizer yet. This morning I got two Early Girls and one Rutgers from the garden. Not sure exactly what I’ll do with them yet, but they look yummy. I have a more that are green, so it will just take some time before they’re ready too.

I did see a few Roma tomatoes that were starting to turn. Unfortunately, I saw some Roma’s that had some bottom rot. Not cool.

The jalepeños are growing with more on the way. The bell pepper plants are now over knee high and have a few white flowers on them.I might have a few early bell peppers, but they’ll be pretty small compared to what I expect to get in the Fall.

We haven’t been getting much rain either. My large 425 gal cistern is almost empty and if we don’t get rain soon, I’ll have to dip into my reserve 325 gal tank. Despite the lack of rain, let’s hope the garden can make it through a sure-to-be hot July.