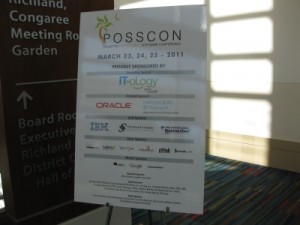 Last week I drove to Columbia, South Carolina to attend POSSCON—the Palmetto Open Source Software Conference. This was my first time attending and I wasn’t sure what to expect, but I left with a good impression. Red Hat sponsored the event and had a presence last year. I think it was a good event for open source in the SouthEast region of the US.

My co-worker, Ruth Suehle, and I were representing Red Hat and promoting opensource.com at POSSCON. Early last week, we caught up with Travis Kepley, a Solutions Architect at Red Hat, who attended POSSCON last year. He gave us an overview of his experience.

I arrived late Tuesday night after a 3 and 1/2 hour drive from Raleigh. I checked into the Hilton near the Columbia Metropolitan Convention Center and got ready for a busy three days. (Nice hotel and easy walk to the conference—big plus.)

Each day was similar for me. I woke up around 7am, went for a run, and then attended the conference. When I travel, I like to run. It let’s me explore the area and see it from a different perspective. On Wednesday, I had a nice route through part of the University of South Carolina campus and the Riverwalk Park. My other jogs took me on different parts of the Riverwalk.

Wednesday was the best day of the conference. We had a lot of traffic at our booth and energy from attendees. The reason I liked it was because we met a lot of new friends that weren’t familiar with the nuances of open source. This is perfect, because one of our big goals is to reach new audiences. There were a lot of heads nodding as Ruth and I explained the open source way beyond technology.

Thursday was similar, but a little less traffic at the booth. It was a good opportunity to do some networking. I met some great folks like Elizabeth Naramore, community manger at SourceForge and Ross Turk, community director at Talend. I also got to meet some authors who have contributed to opensource.com like Deb Bryant and Leslie Hawthorn.

Friday was a slow day at the booth, most attendee’s were at the workshops, learning and applying the principles of open source. It was alright, I got a chance to catch up on some work from the last few days.

As I started thinking about the value of POSSCON, I realized it was a good event to be at. The conference felt big, yet intimate. I liked the four tracks focused on technology, education, healthcare, and leadership. They line-up well with opensource.com. I might suggest a government track.

The people were great. And by this I mean the speakers, the attendees, and the organizers. I didn’t get to attend any specific sessions, but the feedback I heard from attendees were that the speakers gave great talks and were accessible. As sponsors, the organizers made sure we had everything we needed, multiple times throughout the event.

Because I was at the booth for most of the event, I got most of my value from the networking and after hours events. Again, this is where the great people come in. I made some great contacts and got excellent feedback about opensource.com.

POSSCON is a great open source conference for the SouthEast region. It highlights the current state of open source and sets a tone for collaboration for the attendees. It exposes open source to new audiences and provides a place for people to network and share ideas about open source.

Jason Hibbets is a senior community architect at Red Hat which means he is a mash-up of a community manager and project manager. At night, he wears his cape and is a captain for the Open Raleigh brigade, as well as a co-chair for NC Open Pass. Jason is the author of a book titled The foundation for an open source city--a resource for cities and citizens interested in improving their government through civic hacking. While writing the book, he discovered his unknown superpower of building communities of passionate people. Jason graduated from North Carolina State University and resides in Raleigh, NC with his wife, two kids, two border collies, chickens, lots of tomato plants, and a lazy raccoon somewhere in an oak tree. In his copious spare time, he enjoys surfing, running, gardening, traveling, watching football, sampling craft beer, and participating in local government--not necessarily in that order, but close to it. You can follow him on Twitter: @jhibbets
View all posts by Shibby →
This entry was posted in Open source and tagged Columbia, events, open source, opensource.com, POSSCON, Red Hat, SourceForge, Talend. Bookmark the permalink.