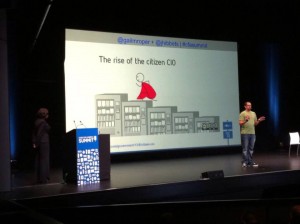 Are citizen CIOs a threat to local governments or a blessing in disguise? With government IT departments producing more open data and participation from community interest groups and citizens on the rise, we’re beginning to see the start of a new movement within open government: telling our government which technologies to deploy. Citizens are identifying—and some are creating themselves—the next wave of applications and resources for their municipalities, such as a crowdsourced answering platform for city services, an open data catalog, and a civic infrastructure adoption website for fire hydrants and storm drains. With this, the role of the citizen CIO is beginning to emerge. END_OF_DOCUMENT_TOKEN_TO_BE_REPLACED