Originally posted on opensource.com and licensed under Creative Commons BY-SA. 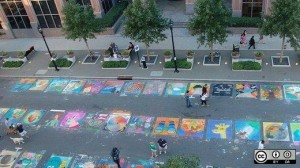 “I think at first it was hard for people to understand—it was hard for us to describe. Sometimes it was embarrassing—this commitment to process over content,” said Khalifa. “Open source has been great for us–the idea that the community decides ultimately what the content is that gets generated. That’s what we’ve been dedicated to, that same spirit. Now because there’s other people doing it in different strata, it’s been great. People are beginning to understand that we’re dedicated towards process.”

Beyond process, there’s collaboration and cross-pollination. By allowing people with different interests and expertise to plan the individual content areas (they call them SPARKs), something bigger is created.

“SPARKcon is definitely a bit on the open source platform because it allows us to bring in folks with smaller expertise to create something much bigger than we could, by programming or planning it all ourselves,” said Sara Powers from the Visual Arts Exchange.

Do you see an opportunity to bring an open source process to something you work on or a project you’re passionate about? It could be related to school or work, business or personal. Maybe it’s something creative like SPARKcon. Or maybe its something in your community that can empower the organizers to improve an event the open source way.

Jason Hibbets is a senior community architect at Red Hat which means he is a mash-up of a community manager and project manager for Opensource.com--a publication and story-telling platform for open source communities. At night, he wears a cape, and is a captain for the Open Raleigh brigade, as well as a co-chair for NC Open Pass. Jason is the author of a book called The foundation for an open source city--a resource for cities and citizens interested in improving their government through civic hacking. While writing the book, he discovered his unknown super power of building communities of passionate people. Jason graduated from North Carolina State University and resides in Raleigh, NC with his wife, two kids, two border collies, chickens, lots of tomato plants, and a lazy raccoon somewhere in an oak tree. In his copious spare time, he enjoys surfing, running, gardening, traveling, watching football, sampling craft beer, and participating in local government--not necessarily in that order, but close to it. You can follow him on Twitter: @jhibbets
View all posts by Shibby →
This entry was posted in Open source, Raleigh and tagged articles, collaboration, community, cross-pollination, open source, opensource.com, participation, planning, Raleigh, Sparkcon. Bookmark the permalink.